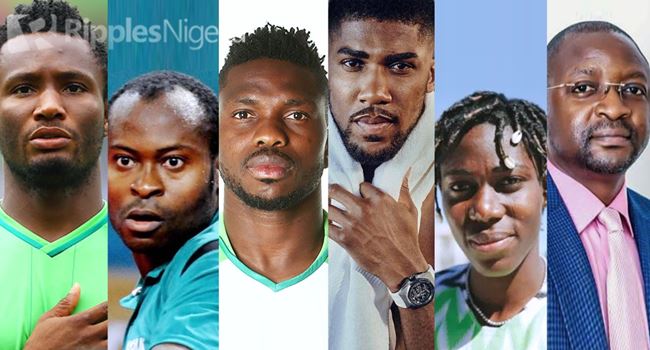 Nigeria is among the top countries in the world with an inexhaustible list of sporting personalities who are excelling in various sports across the globe.

The year 2020 was a very short one globally especially in the sports industry, due to the suspension of activities for several months as part of measures to stem the spread of the coronavirus pandemic.

However, some names still made Nigeria proud during the course of the year. In this review, Ripples Nigeria’s Ben Ugbana reels out 10 of the country’s sporting heroes for the year, cut across all fields including administration.

The inclusion of the former Nigeria international to the coaching crew of the Super Eagles, came as a surprise to many, while to others it was well-deserved. Yobo was appointed assistant coach under Gernot Rohr in February, with the Nigeria Football Federation (NFF) tagging him the future head coach of the Super Eagles. The 40-year-old, a former captain of the Eagles and a winner of the Africa Cup of Nations, got to work immediately and helped the team secure three draws and one defeat in the only four matches played in 2020.

The Akwaibom-born athlete had her best year yet in Judo. On 7 November in Yaounde, Cameroon, Ekuta won third place in the African Open before traveling to Senegal to clinch the gold medal one week after in the 63kg women category finals at the fourth Dakar African Open. Ekuta, who is still garnering points ahead of qualification for the Tokyo Olympics, went on to wrap up an excellent year with a Bronze medal at the African Seniors Championships held at Antananarivo, Madagascar in December.

The former Super Eagles captain is yet to hang his boots, and has continued to do the best he can on the pitch. Since retiring from international football last year, Mikel Obi has impressed in the midfield at Middlesbrough (where he was dubbed a Rolls-Royce of a midfielder), at Trabzonspor (where he helped the team to the brink of clinching the Turkish League title last season) and now at Stoke City, where he is leading the team towards achieving their promotion goal. The 33-year-old has not ceased to impress wherever he goes.

The Honourable Minister of Youth and Sports development, Sunday Dare, has had a very active one and a half years in office, from facilitating the rehabilitation of sporting infrastructure to ensuring the welfare of past and present athletes in the country. In May 2020, Dare visited the families of late sporting legends, Rashidi Yekini, Samuel Okwaraji and Ali Jeje, handing them food items and cash to cushion the effect of the COVID-19 lockdown. The Minister’s Adoption Campaign and his focus of grassroot sports as well as the on-going works at the Lagos and Abuja National Stadiums, are all progress being made under his leadership. Recall that Dare replaced Barr. Solomon Dalung as Sports Minister in August 2019.

The most-decorated Nigerian player in the current Super Falcons team has not stopped pushing for the skies. With four African women’s player of the year award already in her cabinet, Oshoala has put up a fine 2020 performance that could land her another top continental gong. The 26-year-old scored 20 goals in the Spanish women’s league last season in 19 appearances, and has already bagged nine goals in 10 this season. The Barca Ladies striker has also continued to positively affect aspiring female footballers in the country via her foundation, Football4Girls.

The highest-ranked African table tennis player is still playing at the highest level of his career. Aruna, currently ranked as the 20th best table tennis player in the world, is helping his club TTC RhönSprudel Fulda-Maberzell in the German Bundesliga following his move from Portugal’s Sporting CP this year. The Oyo-born athlete has also continued to support the sport in Nigeria as he recently donated equipment worth N750,000 to paralympians ahead of the Tokyo 2021 Paralympics.

The Super Eagles forward was the biggest African signing in world football this year. Osimhen, who had an excellent first season at Lille of France, secured a big move to Napoli of Italy in July this year. The Napoli deal was in the neighborhood of 80million euros, making Osimhen joint most expensive African player in history. The 22-year-old scored 18 goals and recorded six assists in 38 appearances across all competitions for Lille and has also started well for Napoli although has been mostly absent in games due to injury.

Nigeria’s national men’s and women’s basketball teams – D’Tigers and D’Tigress – have been nothing short of spectacular lately. Both teams successfully secured their respective places in the now-postponed Tokyo 2020 Olympic Games, and were already looking to have a podium finish at the games before the coronavirus pandemic halted plans. The men’s team, D’Tigers have already kicked off on a great note, their qualifying race to the 2021 Afrobasket after they defeated Rwanda, Mali and South Sudan in Kigali last month. They now rank as the 22nd best team in the world as well as the best national team in Africa.

The British heavyweight boxer of Nigerian descent has continually made his mother’s country proud. Joshua, 31, is a two-time unified heavyweight champion, having held the WBA, IBF, WBO, and IBO titles since December 2019. He retained his titles one more time after beating mandatory challenger Kubrat Pulev on 13 December at Wembley. Recently, the Ogun State government named a street in the Sagamu Local Government Area of the state after Joshua, who had some of his growing-up years in Nigeria.

The New Zealand-Nigerian mixed martial artist and UFC Middleweight Champion once again took Nigeria to the world stage as he maintained his undefeated record of 20 wins and no losses after knocking out bitter rival Paulo Costa in their UFC fight in September. The 31-year-old is widely regarded as one of the best strikers in the world of mixed martial arts. Adesanya, based in New Zealand, is known to always fly the Nigerian flag in celebration after his fights.