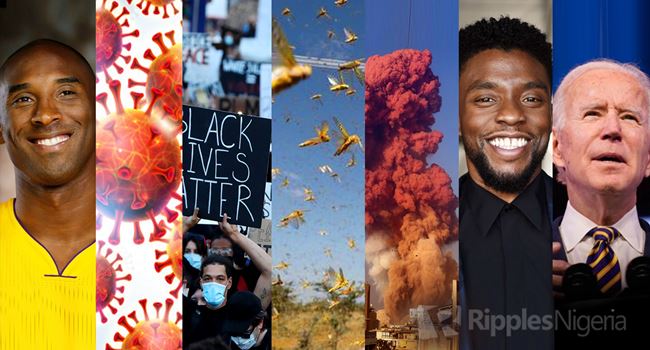 The outgone year 2020 has been most eventful for the world, especially with the coronavirus pandemic and the devastating effects it had since it broke out in Wuhan, China, in the early part of the year. The virus has refused to succumb to efforts by various countries and organizations to look for a remedy for it.

With the novel virus came other incidents that shook some nations, notably plane crashes, oil spills, floods, hurricanes and many disastrous events that occurred in the year.

It may be hard to fathom any other time that the word ‘coronavirus’ would dominate our day-to-day vocabulary, but then, the world also had some other notable events worth mentioning, like the death of African-American, George Floyd, which emphasized the #BlackLivesMatter and gave birth to the #Ican’tBreathe, the deaths of basketball superstar, Kobe Bryant, movie star Chad Boseman, and the tension that the US-Iran conflict caused which almost led to a global conflagration.

The Covid-19 pandemic which crept upon the world from Wuhan in China in February, 2020 was to have a serious and disturbing effect on every part of the world.

The novel pandemic wreaked havoc globally, claiming more than 1.8 million lives in its wake, and destroying the economies of most countries. Though the outbreak occurred in the late 2019, thus its name, it was first discovered in China and later spread all over the world, recording over 80 million positive cases so far.

In 2020, the Covid-19 virtually halted the world with many countries going into lockdown, restricting movements as a measure to curb the spread. The outbreak also stifled the world economy, impacted lives, decimated jobs and placed millions of livelihoods at risk.

Back in January, the world was concerned that the United States was on the brink of a war with Iran as tensions between the two countries hit a boiling point after the US government killed a top Iranian general, Qasem Soleimani.

On January 4, US President Donald Trump tweeted a warning to Iran saying if they retaliated the killing of Soleimani, the US would target 52 Iranian sites “and those targets, and Iran itself, would be hit very fast and hard. The USA wants no more threats!” Trump threatened.

Many people feared that the military action could lead to a full-scale war which sparked the then famous #NoNewWar protests across the US and other parts of the world.

A few days later, on January 7, Iran fired missiles at Iraqi bases housing US troops and though no lives were lost, Trump responded by saying the US would issue more sanctions on Iran.

Hours after Iran fired its missiles, the country mistakenly shot down a Ukrainian passenger jet, attributing it to a fear of US aggression. All 176 people on board including 82 Iranians, 63 Canadians, and 11 Ukrainians died, prompting thousands of Iranian protesters to hit the streets, condemning their leaders over the downed plane.

The death of Kobe Bryant, an NBA legend, alongside his 13-year-old daughter, Gianna “Gigi” Bryant and seven others in a helicopter crash in Calabasas, California, on January 26, was one event that shocked the world as the basketball star was well loved all over the world.

The news left Los Angeles where the beloved athlete played for the Lakers in his entire 20-year career, and the rest of the world in mourning.

Known as the Black Mamba, Bryant was a five-time NBA champion and won the league’s Most Valuable Player award in 2008. In 2018, he won an Oscar for best animated short film for “Dear Basketball.”

Around the world, people paid their respects, with memorials and murals. Thousands, including a handful of celebrities, packed the Staples Center in Los Angeles to honor Bryant in a celebration of his life.

The death of Chadwick Aaron Boseman, aka the Black Panther, one of the most loved and popular black actor in Hollywood, came as a rude shock to the world and was one event that shook the world in 2020.

The actor was best known for playing the superhero Black Panther, for his role as T’Challa /Black Panther which earned him a spot on the 2018 Time 100 world’s most influential people.

Boseman was diagnosed with Stage III colon cancer in 2016, which eventually progressed to Stage IV before 2020. He died on August 28 at his home as a result of complications related to the colon cancer with his wife and family by his side.

The following day, the tweet in which his family announced his death on his Twitter account became the most-liked tweet ever, with more than 6 million likes in under 24 hours, and accumulating over 7 million by August 31.

The #BlackLivesMatter movement, was, perhaps one of the most notable incidents in 2020.

Though the movement was started in 2013 by Alicia Garza, Patrisse Cullors, and a Nigerian, Opal Tometi, on the shoulders of the death of Trayvon Benjamin Martin, the revolutionary movement in 2020, became one of the largest movements in US history with an estimated 15 million to 26 million people taking to the streets to say enough of systemic racism, the illusion of freedom and also started an active conversation about the equality of races.

It became more popular with the killing of an African-American, George Floyd who was killed by white police officers.

The phrase “I Can’t Breathe,” used by Floyd before his death later became synonymous with the #BlackLivesMatter movement. A video recording later revealed that Floyd had told the officer who knelt on his neck for eight minutes, “I can’t breathe” several times.

“I Can’t Breathe” will become the anthem for the #BlackLivesMatter protest which also caused a chain reaction around the world with an average of 140 demonstrations per day.

Joe Biden winning the US Presidency

The 2020 presidential election in the United States of America was seen by many as having the capability of shaping the world. Americans themselves also felt passionately about the presidential election but it would have been foolhardy for anyone to believe that the incumbent President Donald Trump would lose to his opponent, Joe Biden.

The proof, however, was in the turnout with more than 159 million people voting, meaning there was a massive 66.7 percent voter turnout, the highest since 1900.
More than 100 million Americans voted early, either in-person or by mail, the first time in history that more people voted before Election Day than on it.

The size of the mail-in vote and a handful of tight races meant it wasn’t until November 7, four days after Election Day, that the race was called for Biden. Trump refused to concede defeat, insisting he had won.

Read also: Year in Review: 10 top Nigerian politicians who fell from power in 2020

He demanded recounts in several states, claimed large-scale election fraud, and filed lawsuits in state and federal courts to overturn the results. None of his challenges paid off, though.

In February, deadly riots erupted across India after the government officially approved the controversial Citizenship Amendment Bill in December 2019. The bill gave Indian citizenship to asylum seekers from three neighboring countries, but not if they were Muslims.

A number of people died as a result of clashes which coincided with the visit of US President Donald Trump. 24 people reportedly died in the violent protest which rocked parts of New Delhi, and at least 188 were injured.

Also in Hong Kong, anti-government protests which began in 2019 spilled into 2020 with demonstrators calling for greater democracy and more autonomy from mainland China.
With the pandemic slowing in Hong Kong in May, the city successfully contained multiple waves of the virus and the protesters headed back to the streets.

This time, it was to oppose the Chinese government’s controversial national security law, which threatened the city’s autonomy and civil liberties. Several thousand people marched through the streets for months, chanting slogans, including “Liberate Hong Kong, revolution of our times” and “Hong Kong independence, the only way out.”

On August 4, a heavy explosion shook a port in Lebanon’s capital, Beirut, and caused wide scale destruction. The incident occurred after a large amount of ammonium nitrate stored at the port of the city of Beirut exploded, killing over 600 people, injuring more than 2,000 more and rendering over 6,000 people homeless.

The explosion was so devastating that the Prime Minister of Lebanon had to resign from his position with international bodies launching several investigations into the cause of the carnage.

Swarms of desert locusts, a migratory insect from eastern Africa and Southeast Asia, invaded India in April, damaging millions of acres of standing crops. The desert locusts, a short-horned grasshopper species, invaded the Indian cities of Rajasthan, Madhya Pradesh, Punjab and Uttar Pradesh, destroying crops in its wake, throwing the country already ravaged by the impact of the coronavirus into more hunger and famine that it took a loan from the World Bank to restore sanity in the country.

A Japanese bulk carrier, MV Wakashio, ran aground off the southeast coast of Mauritius in July and began to leak fuel oil in the following weeks and broke apart in mid-August. By August 10, about 1,000 metric tons of fuel had spilled, representing a danger for the country of 1.3 million people relying heavily on tourism. The Mauritius government declared the incident a national emergency and sent out signals to several countries in the world to come to its aid.

The period of unusual intense bushfires in many parts of Australia, which began in 2019, continued into 2020. Australian bushfire season, known as Black Summer, peaked during December-January. The fires burnt an estimated 18.6 million hectares as of March 2020, and destroyed over 5,900 buildings.

The fires were among the worst in the country’s history. They killed at least 28 people, destroyed thousands of homes and affected an estimated 1 billion animals, including the koala population, which now faces an immediate threat of extinction.
A study released in March found that the Australia’s fires were made far more likely and intense by the climate crisis.

The Brahmaputra River, which flows through Tibet, India and Bangladesh, burst its banks in Assam late in June due to heavy rainfall and wreaked havoc in India’s north-eastern state.

The flood affected over five million people, destroying crops and homes in October 2020. More than 300 people were reported dead.

The flooding and landslides also caused damage to bridges, buildings, roads and schools. The floods also swamped most of Kaziranga National Park with more than 150 wild animals rescued and as many as 200 died in the prolonged flooding.