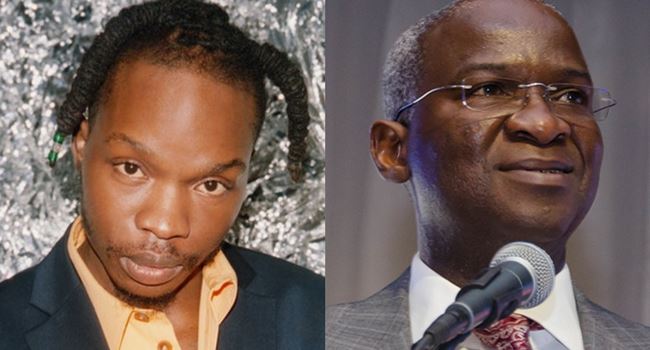 Controversial artiste, Azeez Babatunde, aka Naira Marley, has once again become a discourse on Twitter following an apology letter by an aviation company that described him as “useless”, saying it mistook him for the Minister of Works, Babatunde Fashola.

The company, Executive Jets Services Limited in a letter of apology had described leader of the Marlian group movement and Kim Oprah flown into Abuja to perform at a convert, as “a bunch of useless people.”

Following its suspension, the management of the aviation company in a letter on Monday addressed to the Federal Ministry of Aviation admitted its fault, and apologised for flying singer Naira Marley to Abuja for a concert.

In a letter on Monday, Sam Iwu, the company’s chief executive officer, said, “So on Saturday morning 13th June, 2020 my staff called me that they have a charter flight to Abuja and that the passengers are already in the lounge. As a rule passenger manifest is always sent to me before any departure, when I went through the manifest and I saw FASHOLA BABATUNDE I thought it was the Honorable Minister of Works going to Abuja with his men, so we decided to do the flight since (he) is a serving minister of the Federal Republic of Nigeria, I didn’t know that it was a bunch of useless people.”

Many Nigerians took to twitter to react at the aviation company’s excuse that it mistook Minister of Works, Fashola, for Naira Marley, with many hilarious tweets:

See some of the tweets below

I was wondering how Naira Marley got to Abuja. It all makes sense now. Breaking lockdown orders were not enough. It seems he also went ahead to impersonate BABATUNDE Fashola. If this is true, then I hope this is escalated to the extent of its severity. pic.twitter.com/aD2wwruEhg

My own is…the guys at execujet saw the name Babatunde Fashola….they looked up at the “useless people” and thought. Yea…that must be the minister and his Aides…the only way it makes sense is that those behind the desk were Marlians and they saw their president ???

A bunch of useless people ????.. impersonating Babatunde Fashola is the height of it all !!! Marlians come forward !!! pic.twitter.com/Z8InCKtAZP

Whenever a deal goes wrong they cook up all manner of stories and muddle the waters so everything looks confusing. The explanations for this Babatunde Fashola/Naira Marley Abuja flight now raises more questions than before. Cover ups. Lies. Deliberate diversion. Not surprised.

This is the reply of the CEO of the Flight Company that flew Naira Marley to Abuja.

Flight was meant for a judge truly.
But the judge had gone already and they sent him a passenger list with “Babatunde Fashola”.

He says they are sorry they flew a “bunch of useless people” ? ? pic.twitter.com/JXjROdi3NL

Babatunde Fashola, minister for works and and housing you are welcome on board sir

How can you say that you saw Babatunde Fashola and thought it was The Minister?? Do we have any unique names in this country? Sam Iwuajoku is a liar and he is so bad at it. Just tell us say you be Marlian and you decided to fly your President. Nobody will beat you. pic.twitter.com/Kp7B7pEhuT

This is the height of it all. Stealing someone's disease "herpes" for clout? Even Naira Marley aka Babatunde Fashola no do reach this one na. Haba!!! https://t.co/Lgx8sp4Sqp

The letter from the aviation company which flew Naira Marley to abuja is so unprofessional. How will you say you thought it was the honorable minister Babatunde Fashola??
Las Las everybody ni barawo.

From Azeez Fashola to Babatunde Fashola, he's not aware.

When Kim Oprah and Naira Marley boarded the jet, departed from Lagos and arrived at Abuja, he's not aware.

CEO of ExecuJet is a disguised Marlian. Voilà! also one of those BUNCH OF USELESS PEOPLE. ?#Shockcorn ? pic.twitter.com/F3R5wNicRA