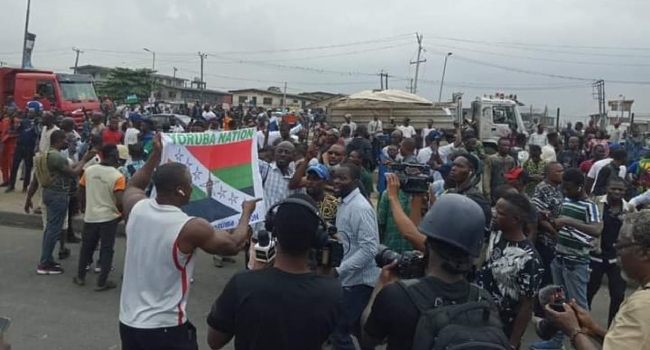 Senior Elders Forum of the Yoruba Council of Elders (YCE) on Tuesday disowned the recent protest at Ojota area of Lagos.

Speaking through its former national president however, Samuel Agbede, the forum said the bloody rally was masterminded by Nigerians outside the country.

The elders, however, maintained that more than 90 percent of Yoruba people were fed up with the country.

The forum also urged the youth not to fall for the antics of desperate politicians abroad trying to use them as instruments of violence in the country.

The statement read: “From our intelligence report, more than 90 per cent of Yoruba people are already fed up with the present concoction called Nigeria. It is only those who are feeding on the crumbs that fell from their masters’ table that are still paying homage to their Northern leaders.

“If we had an inkling that they were going to hold the protest, we would have said no, don’t do it because Nigeria is in a dangerous situation especially now when the election is just about 45 days. At the moment, whoever organised that protest chose the wrong time. This is a highly volatile and sensitive period. People should do more planning and thinking.

“INEC which had been saying it’s up to the task is already becoming jittery; everyone is wondering if we are going to be safe. We won’t blame INEC if it’s feeling insecure. The issues of agitation are mounting in every book and crannies of this country. If INEC is up to the task, it should go ahead because if they cancel the election, it is just postponing the evil day.

“Insecurity could likely go unabated. Postponing the election could lead us into chaos and anarchy. If they cancel the election, will President Buhari be there till May 29 next year? Will he still be in Aso Rock?”