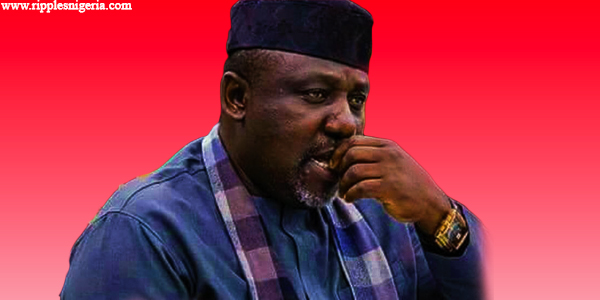 Governor Rochas Okorocha of Imo State has called on INEC to give him his certificate of return, insisting that the electoral body does not the power to withhold it.

Okorocha, who was declared winner of Imo West senatorial election on the platform of the All Progressives Congress, noted that the commission cannot seize his certificate because of a mere petition against him.

It would be recalled that the Returning Officer for the election, Prof Francis Ibeawuchi, declared Okorocha as the winner of the poll, having polled 97,762 votes ahead of his closest rival, Jones Onyereri of the Peoples Democratic Party, who had 68,117 votes.

However, Ibeawuchi later claimed he was forced to declare Okorocha as the winner to save his life, hence the commission’s decision not to issue a certificate of return to him.

Okorocha stated this in Owerri on Wednesday, when some of his supporters paid him solidarity visit.

The Governor said: “I wonder why INEC will withhold my certificate for a frivolous reason, without hearing from me. I am not a violent person and those who know me know that,” he said.

“This is why we have peace in Imo state. The Returning Officer could not have done that under duress under the watchful eyes of the Police, DSS and party agents. I am not unmindful of the fact that those who are fighting me from Abuja are anxious to see me removed as a senator. I urge INEC to do the right thing immediately by releasing my certificate.

“Let me tell every Nigerian that I fought no one and no one should fight me. If anyone fights me, he will be the loser at the end of it all. My INEC Certificate cannot be touched or seized, doing so is belittling democracy in Nigeria.

“It is only the tribunal that has the right to say otherwise once a result is declared. INEC cannot seize my certificate by mere petition written by somebody in a case I was not given the opportunity to present my own side of the story.”