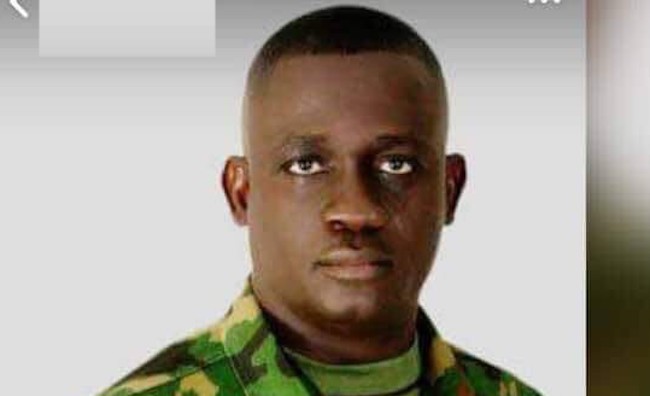 The Nigerian Army has dismissed claims that one of its officers, Col. Ibrahim Sakaba, was assassinated for refusing to loot funds meant to prosecute the fight against the Boko Haram sect.

The late Sakaba’s widow, Oluwaseun, had accused the Nigerian Army of assassinating her husband for refusing to be part of an alleged plot to loot funds meant for the counter-insurgency operation in the North East.

The woman’s statement came a few days after the army claimed that 1,081 Boko Haram terrorists had surrendered to troops in Bama, Borno State and begged for forgiveness from Nigerians.

The Director of Army Public Relations, Onyema Nwachukwu, who reacted to Mrs. Sakaba’s claim in a statement issued on Thursday in Abuja, said the officer was not assassinated neither was there any plot to loot military funds.

He said the late soldier died during a military operation.

The statement read: “The Nigerian Army has been notified of an article making the rounds online in which an allegation credited to Mrs. Oluwaseun Sakaba, the widow of late Col Ibrahim Sakaba alleged that the late senior officer was assassinated for refusing to loot funds meant for fighting the Boko Haram insurgency.

“The late senior officer’s widow was quoted to have made several uncomplimentary comments about the institution of the Nigerian Army, making reference to unfounded and baseless claims devoid of any fact.

“While the Nigerian Army is not interested in joining issues with anyone with respect to the enormous sacrifices made daily by our gallant troops, it is however expedient to address the weighty allegations credited to the widow.

The Nigerian Army acknowledges the emotional agony associated with losing loved ones and that cannot be quantified by any unit of measure.

“The demise of late Col. Ibrahim Sakaba, like those of other officers and soldiers who paid the supreme price in the war against terrorism in the North-East, is one that is painful to the Nigerian Army. These men and women died serving our nation, fighting to restore peace and stability in the North East.

“This is in tandem with the constitutional mandate of the Armed Forces of Nigeria. Therefore, it will be totally mischief and an assault on the psyche of our troops, who are relentlessly fighting, to begin to insinuate any plot against one of our own. And what is the plot here? That troops were led by their commander for an operational engagement is not a plot, as anyone may want to insinuate. Rather, it was a clear military mission with a clear objective.”