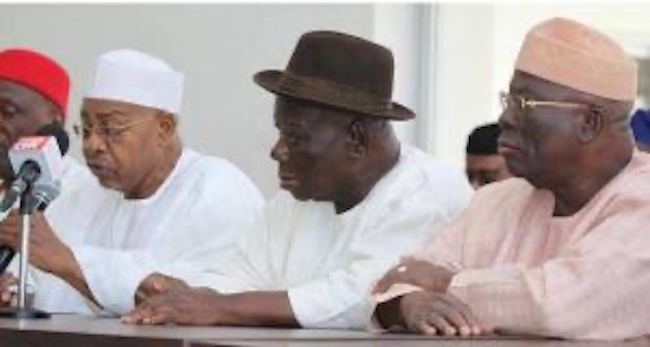 The Southern and Middle Belt Forum (SMBLF) on Monday warned the Northern Elders’ Forum and others in the region on the ongoing efforts to dump the zoning arrangement ahead of the 2023 general elections.

In a communique signed on behalf of the NEF by former Vice-Chancellor of the Plateau State University, Prof. Doknan Danjuma Shenni, the group also posited that the clamour for parties to zone their presidential tickets to the South-East was not healthy for the country as the 2023 elections approached.

The Forum also slammed the NEF Chairman, Ango Abdullahi, for saying zoning is “dead and buried.”

It insisted that zoning was important for the country to remain a federation.

The statement read: “It has become necessary to underscore that Ango Abdullahi, with his established disposition of worrying inconsistency, tending to duplicity, is one of the people disturbing the polity and peace of Nigeria. A few days ago, this same Ango fumbled with the idea of a so-called consensus arrangement for Northern presidential aspirants, the backlash of which he has not come out, to now spring this reckless declaration that zoning is ‘dead and buried.

“Ango and his Northern Elders do not have the right, much more the power, to kill and bury zoning! But, if it’s Nigeria entirely that they want to ‘kill and bury,’ let them be left with no doubt that we are ready for them!

“The history of zoning between the North and the South is well-known to everybody in this country and has been respected by all the major political parties in Nigeria. In the Second Republic, the National Party of Nigeria (NPN), adhered to the policy of zoning. The People’s Democratic Party (PDP) has also, since its formation in 1999, adhered to the zoning of principal elective offices.

“Sadly, we are now been told by the newly ‘imposed’ National Chairman of the All Progressives Congress (APC), Senator Abdullahi Adamu, that the APC has not decided on the zoning of the presidency. Such a statement at this stage, with about 30 days to the presidential primaries, amounts to outright dishonesty and chicanery. Who are they trying to deceive and who will allow them? It becomes even more upsetting given the fact that the statement came from someone who himself emerged as National Chairman of the APC through the policy of rotation and zoning.

“More importantly, the APC Constitution, under article 7, relating to its aims and objectives, commits the party to firstly, “promote and foster the unity, political stability and national consciousness of the people of Nigeria.” The question then is would the dumping of the zoning policy foster unity, political stability and national consciousness in Nigeria?

“The APC National Chairman, Senator Abdullahi Adamu, ought to know better because he has been in the nation’s political space for quite some time, since the Second Republic and should have a broad understanding of the political interplays that have sustained Nigeria’s oneness to date. Thus, should not dance to the drumbeats of political pillagers but rather, as National Chairman of the ruling party; firmly uphold the patriotic and democratic considerations that have kept Nigeria together as a country.

The groups, however, called on the APC, NEF, and others to abide by the zoning principle in 2023 in order to maintain a united country.

“We, therefore, strongly caution all our governors, present and former, and top politicians not to accept the position of Vice Presidency from any northern presidential candidate.

“We urge the 17 Southern Governors, who unanimously declared that the presidency must come to the South in May last year, at Asaba, Delta State, to remain resolute. They have the absolute support of the Southern and Middle Belt Leaders’ Forum; we stand firmly by them. This country belongs to all of us!

“Let everybody take this as a serious warning that the issue of zoning cannot be swept under the carpet; it cannot be dead and buried, if zoning is buried, Nigeria is then buried. And if they are thinking that this is a joke, let it be known that it is not.

“If we cannot abide by the established principle of rotation and zoning between the north and south, then we should not continue with ‘One Nigeria,’. We should go back to what we were as a people, before the amalgamation of 1914,” the Forum concluded.

Related Topics:#featured2023Southern and Middle Belt leaders
Up Next