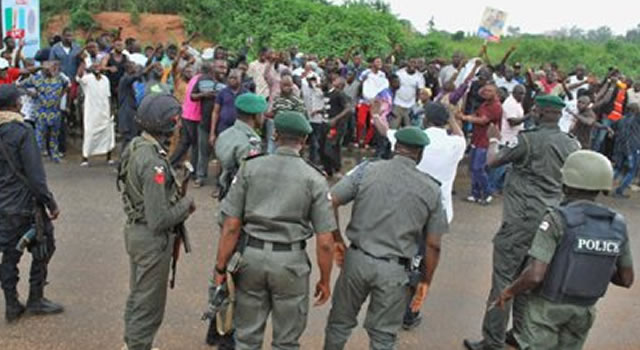 There was pandemonium on Wednesday, at Okokomaiko area in Lagos, when some youths attacked and injured some policemen while celebrating President Muhammadu Buhari’s re-election.

It was gathered that both lanes of Mile 2-Badagry Expressway were blocked by youths from Alaba Rago area, around 7:00 am which prevented motorists from gaining access.

A resident, who identified himself as Peter said a lot of motorists who were heading to Lagos Island, Apapa and other areas of the state, had to alight from vehicles and walk several kilometres to get to their workplaces.

According to him, the attack was triggered by angry youths in response to operatives who arrived the scene to remove the tyres and other objects used in barricading the expressway. He added that many of the youths were violent as they threw sachet water, pebbles and sticks at people who seemed upset by their behaviour.

“Some exuberant Hausa youths, around 7am, blocked the Mile 2-Badagry Expressway while celebrating the victory of President Muhammadu Buhari in Saturday’s presidential election.

“The celebration was not peaceful because apart from blocking the road, they were fully prepared for anyone who dared to query them. They did not mind the gridlock that their action caused. But when the police arrived to remove what they used to barricade the road, they attacked the policemen and wounded some of them.”

Chike Oti, the Police Public Relations Officer in the state, who confirmed the incident said the policemen, led by the Divisional Crime Officer, Sunday Oyekanmi, were attacked, and taken to the hospital for treatment before being discharged.

He added that 37 youths involved in the attack and barricading of the Mile 2-Badagry Expressway at Okokomaiko end, had been arrested.

“Some youths blocked the expressway and when the report got to the command, it deployed policemen on traffic assignment to the area. When the policemen got there, they tried to persuade the youth to leave the road.

“In the process, the youth attacked and injured some policemen. However, we have arrested 37 of them, who have been linked with the attack on the policemen.”

Meanwhile, an attack was also made on some Igbo traders by hoodlums on Lagos Island. It was gathered that the attack which started at 9:00 am, prevented traders from opening their stores until police intervened and prevented the event from intensifying.

The hoodlums, who were reportedly armed with weapons, issued threats on the traders, saying, “We campaigned with them to vote for Buhari, but they refused and voted for Atiku; they cannot come here to do business again; they must vote for whoever we ask them to vote for; if they ever vote for the PDP again, that will be their end.”

However, Oti who debunked the attack on the traders said there was a misunderstanding among both parties which was resolved as soon as the police were informed about the situation.

He said, “The measure was aimed at preventing the spread of violence. Our men are everywhere on the island to forestall any attempt by ‘area boys’ to foment trouble, which may lead to affray.

“We have assured residents and workers around the island area of the state to go about their normal business as the police are in full control of the area; the whole place is peaceful.”