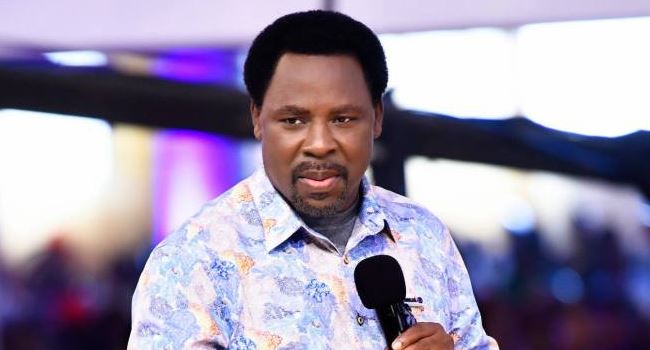 Joshua, who confirmed the development on his Twitter handle Thursday, said the TV channel was suspended over a video clip of one of his sermons which YouTube believed contained hate speech.

He wrote: “Emmanuel TV YouTube suspension: Our mission is to share the love of God with everyone – irrespective of race or religion – and we strongly oppose all forms of hate speech!

“We have had a long and fruitful relationship with YouTube and believe this decision was made in haste.”

On a separate posting on his Facebook page, the cleric urged Nigerians to raise their concerns over the TV channel’s suspension on other social media platforms.

To drive home his claim that the said video clip did not contain any hate speech, Joshua uploaded the video and asked Nigerians to judge for themselves.

In the video clip, Joshua was heard prophesying that a man was possessed by a strange spirit and asked the man to come out for deliverance.

“God hates sin, not sinners. When the Bible says, ‘Do not judge so that you will not be judged’, it means we should hate sin, not the sinner because sinners can change.

“If you have killed a sinner by judging him, there will be no opportunity for change.

“Sinners can be delivered. We should hate the act, not the people because our battle is not against flesh and blood but against the ‘spirit beings’ that cause all these acts,” he stated.

At the end of the clip, Joshua wondered how the preaching was viewed as hate speech.