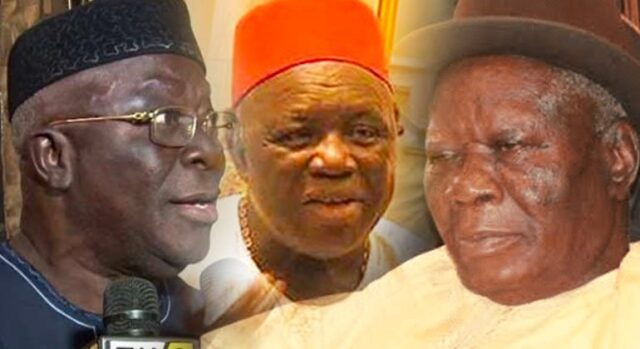 The Southern and Middle Belt Leaders’ Forum (SMBLF), on Monday described as unfair and unacceptable the Peoples Democratic Party (PDP) on the purported plan to throw its presidential contest open for all aspirants.

There were reports a few days ago that the opposition had concluded plans to throw the presidential race for all aspirants to try their luck at the presidential primary slated for next month.

However, the chairman of the PDP Zoning Committee, Samuel Ortom, had dismissed the reports, saying no concrete decision had been taken on the matter.

In a statement signed by the quartet of Chief Edwin Clark (PANDEF), Chief Ayo Adebanjo (Afenifere), Prof. George Obiozor (Ohanaeze Ndigbo) and Dr. Pogu Bitrus (Middle Belt Forum), the group charged the party’s National Executive Committee (NEC) to reject the recommendation of the committee and zone the presidency to the South in national interest.

The SMBLF also threatened to work against any party that fails to zone its presidential ticket to the South.

The statement read: “The Southern and Middle Belt Leaders’ Forum (SMBLF), is dismayed by the purported recommendation of the 37-Member PDP Zoning Committee to throw the party’s 2023 presidential ticket open to all parts of the country and the justifications afterwards.

“ The said conclusion of the Governor Ortom-led Zoning Committee is not only abhorrent, unfair and unacceptable, but it is also a purveyor of discord. Accordingly, SMBLF urges the National Executive Committee (NEC) of the People’s Democratic Party to outrightly reject the recommendation.

“SMBLF cautions the PDP not to violate its principle of zoning and rotation of power between the North and the South. Noting that the founding fathers of the party and the framers of its constitution, in cognizance of the nation’s diversity, and in line with the federal character principle, rightly provided under Section 7, Sub-section 3C, that there should be a rotation of party offices and elective offices, not only to promote equity, fairness and justice but equally to avoid the preponderance of persons from any particular section or ethnic group of the country in the running of the affairs of the party and the government of Nigeria as we have today, the one sided government of President Muhammadu Buhari, the PDP has, over the years, faithfully adhered to this principle of zoning and rotation; they cannot afford to discontinue it now.

“Furthermore, SMBLF observes that opinions being advanced against zoning are frivolous and absurd. And that the suggestion that the 37-Member PDP Zoning Committee which had its membership drawn from the 36 States and the FCT, had a consensus on its reported submission of an “open presidential primary” is neither here nor there.

“SMBLF insists that all major political parties including the PDP and APC must be fair to the South by zoning their Presidential tickets to the South in the national interest.

“The notion that an open presidential primary election, which is not zoned would afford the 36 states to vote so that only the best and most competent person will emerge as the flag bearer of the party, is buncombe. It is not correct, because even where zoning is done, it is not only the people who come from the area where it is zoned that will vote.

“In the 2018 presidential primaries of the PDP, and at other times, for any serious party, every delegate of the party voted. So whether it is zoned or not zoned, the same party delegates from the 36 states and the Federal Capital Territory will be available to vote.

“ This is exactly what happened in 2018 Port Harcourt, where Atiku Abubakar defeated about 12 Presidential Aspirants from the North, with the votes of delegates of the 36 states and the FCT, Abuja, which he won with about 1500 votes.

“We repeat, he was not only voted for by Northern delegates. Who is Fooling who? Or who is deceiving who? Zoning simply promotes fairness and equity and gives a feeling of belonging to all sections of the country. Does anyone need to be apprised of the ‘man-made’ compositional disparities in Nigeria?

“SMBLF, therefore, re-echoes the reiterated position of the 17 Southern Governors that the South should produce the next President of Nigeria and further insists that we shall work against any of the major political parties that do not zone its presidential ticket for the 2023 election to the South.”