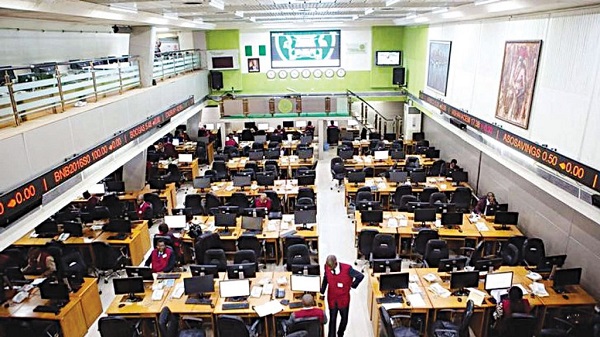 According to data from NSE, the most active sector by volume was Financial Services Industry with 1.099 billion shares valued at N11.110 billion traded in 12,544 deals; thus contributing 71.35% and 60.92% to the total equity turnover volume and value respectively.

Top three equities by highest volume of trade for the just concluding market are First Bank, Guaranty Trust Bank (GTBank) and Zenith Bank. They account for 553.512 million shares worth N8.931billion in 5,132 deals, contributing 35.92% and 48.98% to the total equity turnover volume and value respectively.

Ripples Nigeria gathered that the top five gainers at the just concluded are Portland Paints which began trade N2.84kobo at the start of the week but closed at 3.25kobo on Friday.

Livestock also made it to the chart as its share price rose to N2.24kobo on Friday, against the N2.03 per share it opened the week with. Africa Prudential completed the top five having opened Monday trading with N6.64kobo and closed Friday with N7.30kobo.

For the top five decliners of the week, Consolidated Hallmark Insurance ranked highest as its share price plunge from N0.46kobo to N0.33kobo per share.

Royal Exchange also made the list having closed the week with N0.25kobo below the N0.30kobo it opened Monday’s trading with.

Vitafoam share price also failed to surpass the N9.30kobo it opened the week’s trading with, closing Friday’s market with N7.80kobo.

Stanbic IBTC also hit the drop zone as investors dumped the lenders share, dragging Stanbic IBTC share price down to N38.70kobo at the end of Friday’s market, below the N45 it opened with.

UPDC share price fell as well, declining from N6 to N5.35kobo per share at the end of the week’s trading.