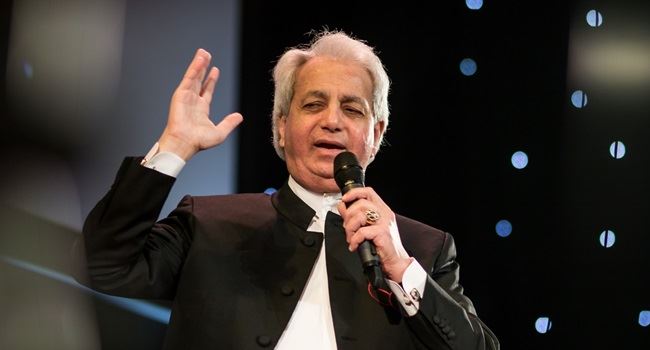 A well-known cleric, Benny Hinn has described Nigeria as having evil powers, but said that God had assured that the powers would be broken.

He also said that two years before the powers would be broken, that God would defeat the purpose of Islam in Nigeria.

He stated this during a Christian event in Accra, Ghana tagged the ‘Experience conference’.

He said, “The Lord declares the evil powers in Nigeria will be broken. I see two years before that power begins to shatter in Nigeria. God will begin to defeat the purpose of Islam in Nigeria,” he continued, leading attendees in prayer.

In the video of the event currently trending on some social media platforms, a self-acclaimed Security Analyst, and activist, Alhaji Irbard Ibrahim, faulted the clergy’s message and said that he should be banned from entering Ghana.

According to him, Hinn preached hate and his message was extremist and divisive.

He said, “Ghana should never again allow this man into the country to preach hate, division and extremism. We can’t allow foreigners to fly in for a few days to sow the seed of discord and national disunity in Africa.

“In what capacity does he declare Ghana a Christian nation, isn’t that an affront to our constitution… why have we cheapened our sovereignty as a country?”

Ibrahim, who also condemned Benny Hinn’s comment on Nigeria said, “We can’t tolerate this as a people in this black continent. Let’s all endeavour to strengthen the bond of brotherhood, good neighborliness, mutual respect and tolerance for each other’s faith.

“God or Allah is neither American nor Israeli… Ghana and Africa do not need an American, Israeli or an Arab to tell us how to commune with our creator”, Ibrahim said.