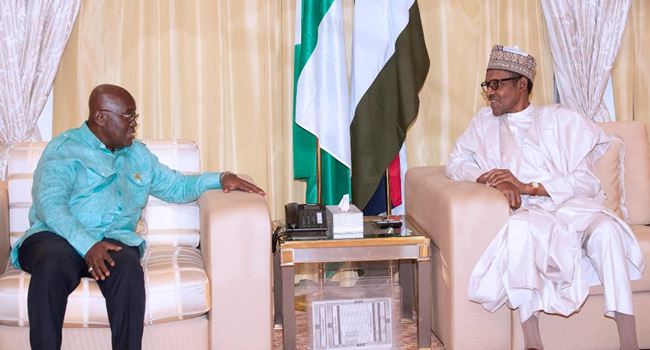 A corporate narrative on the Nigerian government’s decision to shut down its borders with illustrations on how this affects every spoon of rice residents in Nigeria eat, and details of its linear implications on neighbouring economies like Ghana, Benin, Togo among others.

In response to this national buff, the administrator (remembering his military background) furiously ordered for the immediate closure of the borders, and administered (along its routes) heavy military surveillance troop to keep watch until further notice.

The administrator said it was a temporal development –that orders would be relaxed once measures are put in place to contain the situation. Off, in furry, he flew out to Pacifico Yokohama, the hosting Yokohama city in Japan to grace the conference where he would be meeting fellow administrators serving in his capacities in other countries.

On his way, he thought about a convincing explanation for his standing order –how to present it diplomatically without sounding harsh and hostile. Because the conference wasn’t staged purposely for this cause, he knew it won’t be a major deliberation, so, he made few jottings of his thoughts and moved on to rehearse other would-be key highlights of the 3-day meeting.

He was right. As soon as the conference commenced, he was quizzed on his decision. This time, a sensitive poser that (ordinarily) was sufficient to topple him met him readily confident. Without hesitation, he answered as collected as possible, noting that the borders have been a disaster through the years and long due for an urgent attention.

According to his sentiment, his administration would not blind his eyes to acknowledge that the porous borders have become an albatross to rapid economic viability. That, for as long as a solution to cub the menace would be developed; he was not going back on his orders –and that, if any time later, not just yet.

Nigeria, being a major market determiner in Africa courtesy of its bursting population of about 200 million, had made tens of thousands of people multi-millionaires via their engagement in various trans-border trades and deals.

Not limited to the green-white-green nationalities, citizens of neighbouring countries had also been benefitting from this large market potential of the country. The Republic of Benin, for instance, had enjoyed from this perk given its relative position as it shares borders at various points with Africa’s richest oil country.

This relationship made Benin, a country with less than 15 million population a top importer of rice. And, economists began to wonder if there were ghost rice consumers in Benin.

Investigations later revealed that most of the rice imported to Benin from Thailand and India were only warehoused for storage and then allegedly pushed illegally across the borders into the waiting Nigerian marketing where over 150 million citizens are hungry.

As far away as Ghana is from Nigeria with Benin dividing the two West African countries, goods from Ghana also travelled through the route to connect with the “ever accommodative” Nigerian market.

While some (Nigerians and foreigners) were profiting from this venture, making millions on daily basis; Nigeria, as a country on the other hand, was increasingly denied of gains that ought to be accrued from tariffs on goods when imported legally.

President Muhammadu Buhari, the framed administrator in the story, had learnt that the recession had forced locals back into farming. The result, according to his team of researchers and consultants, was that rice production was gaining figures and can now sustain local demands.

In their advice, it was no longer economical “wasting” scarce foreign reserves on the importation of goods available or produce-able within the country. To make matter worse, the officer in charge of the sea port lamented of losses on account of indiscriminate smuggling across the borders.

So, during the TICAD function in August, the administrator was armed with enough information and anger.

“Now that our people in the rural areas are going back to their farms, and the country has saved huge sums of money which would otherwise have been expended on importing rice using our scarce foreign reserves, we cannot allow smuggling of the product at such alarming proportions to continue,” he blared.

Aside the return of many to the farm, Nigerians in the first few weeks of the closure began to express displeasure as prices of goods (rice in particular rose). Foreign rice became scarce. Local rice, which no one patronized before, began to gain prominence as an alternative in the market.

Read also: BUSINESS REVIEW: How tech is reducing unemployment in Nigeria. We examine the Andela story and its impact

Before long, seemingly short-charged importers began grunting but no one cared. Invariably, the administrator’s August order had just blocked an access to millions of naira for these businessmen.

While the administrator and his policy team argued that the development will boost local production as over-dependant on importation will only further weaken the economy, countries like Benin and Ghana (in less than 60 days) were already feeling the bite on the lips of their economies.

Along the borders on the side of Benin, loads of tomatoes and other perishable goods were soon observed to be rotting. It was quite unfortunate because before the border closure this wouldn’t have happened. These goods would have, instead, been smuggled into the country without hitch.

Thing became so difficult that the experience of the economic down turn led Ghana to cry out to the mercy of the administrator. Reports revealed that Ghana, through its Foreign Minister and Regional Integration, Shirley Ayorkor Botchwey (on Tuesday, 15th of October), had voiced out, pleading that the ban be lifted so that “Ghana’s exports can enter” the Nigerian “market.”

Increased revenue through the port

Contrary to the general assumption, business did not stop as the sea ports and airports were not locked. In fact, business leaders and traders who could not stop their activities have moved on to access the Nigerian market through its ports. This, according to the administrator, was fine.

Following the trend of his administration, every discerning mind had already noticed he has only been particular on raising funds from different channels. Perhaps, what also led to the proposed increment in VAT from 5% to 7.5%.

So, with emerging reports from his officer in charge of the ports (Col Hameed Ali) disclosing that his agency currently generates over N5bn daily, the administrator seems more than excited. And, nothing (appeared) would be convincing for him to relax his verdict yet.

In the end, local farmers were one of the beneficiaries of the policy. The influx of Made-in-Nigeria rice became overwhelming. Analyzing the situation, the upward scale resulted on account of the scarce foreign rice in the market and its relative high cost (about N26, 000) where available.

This was how the local rice (as of October, 2019) continued to sell fast despite costing N17, 000 a bag. It was expected, however, as Nigerians with their cost-centric psychology would only have patronized the local option while trying to save cost. While this was going on, increased patronage was (in turn) boosting the income of local farmers.

Unfortunately, however, greed soon found its way into hungry local businessmen as Made-in-Nigeria foreign rice began to emerge. Rice sellers, by the second week of October, were found stocking local rice in foreign bags to sell to unrepentant foreign rice consumers. This way, they started making about N10, 000 more from their local rice sales.

Although, measures (as at the 18th day of October) from the administrator were yet to be put in place to curb the corrupt practices –perhaps, a new rice reform policy would be signed so that those guilty would be sanctioned.

Revenue loss by some local manufacturers

Apart from the sacrifices of having to switch to local rice which is still struggling to taste as soft and as tasty as the foreign rice, some Nigerian manufacturing companies also suffered revenue drop in the process.

Fruit juice producing company, So Fresh, for instance, could no longer import some of its ingredients that were unavailable in Nigeria. Their likes have, since the border closure directives, been witnessing decline in its revenue.

While Buhari and team found a temporal victory in their efforts to stop smuggling that is equally helping them gain more revenue through port uses, some local businesses paid heavily and painfully to see it come through.