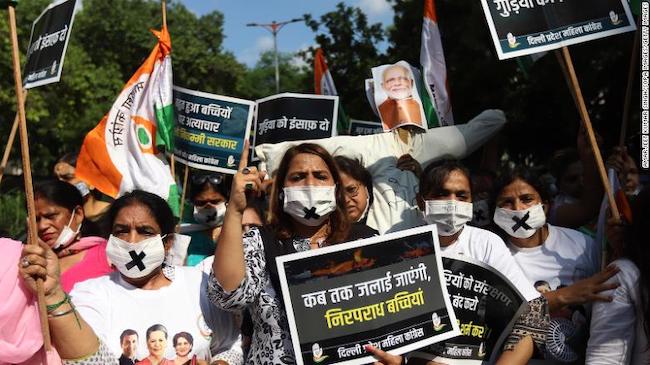 Thousands of Indians on Wednesday protested the rape and murder of a nine-year-old girl from one of India’s most oppressed castes societies.

The protests which began on Sunday in New Delhi, entered its fourth day on Wednesday, and had crippled economic activities in several parts of the city.

The inscriptions on some of the placards read: “We want justice,” and “Justice for India’s daughter.”

A senior Delhi Police official, Pratap Singh, quoting a statement from the victim’s mother, said the girl who is a member of the Dalit community had gone to fetch water from a Delhi crematorium on Sunday.

“After the girl did not return for half an hour, the crematorium’s priest, 55-year-old Radhey Shyam called the mother and showed her the body of her deceased daughter.

“The girl was lying on a bench there; they told her mother that look, her lips are blue and her body is burnt from the lips down to the wrist.

“The mother was told that her daughter had been electrocuted while trying to fetch water,” Singh added.

Related Topics:India protest
Up Next