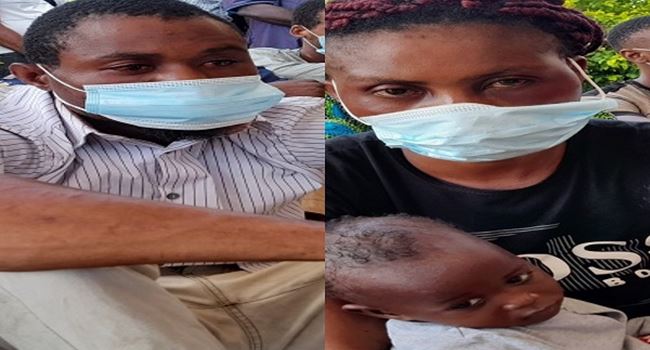 The Ondo State Police Command has arrested a 31-year-old woman, Titilayo Kudaisi, who allegedly connived with her boyfriend, Oluseyi Akinsete, to steal and sell young children in different parts of the country.

The couple were arrested on Thursday after allegedly stealing a six-month-old baby at the Odo-Ota Sawmill area in Ilorin, Kwara State.

On interrogation, Kudaisi reportedly said she and Akinsete stole the baby after the parents left the house while the boyfriend stood guard.

She also confessed that they had earlier stolen two children and sold them to childless couples in Imo State for N500,000 and N300,000 respectively.

Kudaisi also admitted that she had sold her own baby on the prompting of her boyfriend who introduced her to the business of child trafficking.

“We went to steal the child from his parents’ house in Ilorin, Kwara State,” she said.

“My boyfriend was aware of the movement of the boy’s mother. After surveying the environment, we now moved in to steal the toddler.

“I met my boyfriend who lured me into the business in Lagos where I was living. He invited me to Ilorin, and I went to meet him with my only child who was three-years-old. The father of my child is late.

“After arriving Ilorin, he convinced me that we should sell my baby but I disagreed with him.

“After much persuasion, I agreed that we should sell the baby after he told me that he will help get my baby back.

“We later sold my child to someone in Imo State for N300,000 but I could not get my child back despite his assurance.

“It was after we sold my child that we went to steal the baby at Ilorin. After stealing the baby, we travelled down to Ondo town in Ondo State and I advised him that we should return the baby because I was scared of the entire scenario.”

During his confession, Akinsete reportedly said he started the child trafficking business in 2019 through a friend he identified as John Emeka.

Akinsete who claimed to be a father of three, however said he has not sold any of his children.

“In total, I’ve been able to steal three babies since I started the business. We used to sell them to our buyers in Imo State.

“The guy that used to buy the babies from us told us that he works with an orphanage home.”

The Ondo State Commissioner of Police, CP Bolaji Salami, who confirmed the arrest of the suspects, said they would be charged to court as soon investigations are concluded.

Reps move to probe reports of trade in human organs between Nigeria, China