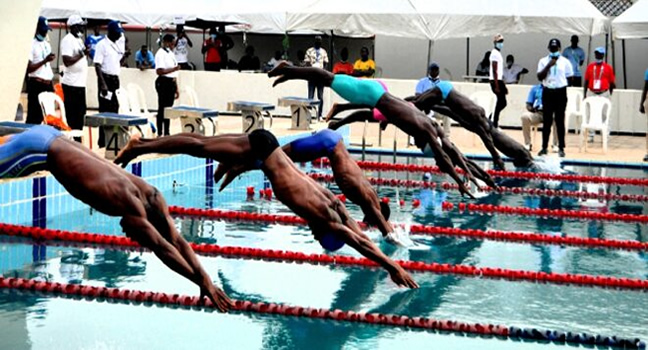 As the National Sports Festival (NSF) goes on, Team Delta has continued to dominate the wins at the festival, as the team on Thursday, won three gold medals in the swimming event.

Although it was a feisty battle between the Delta and Bayelsa teams, the Bayelsa counterpart won two gold medals, while Team Kano also claimed their first gold medal at the event.

In the 800m freestyle men, Opute Clinton of Delta set a new national and festival record, emerging the winner of the event in 9m:34s:53, beating the previous record set by Samson Opuakpo in 2006.

READ ALSO: FG not aware of any threat from Edo govt to stop sports festival –Ministry

In the 100m backstroke women, Delta’s Timipamere Akiayefa won with a time of 1:14:93, defeating Edo and Bayelsa to win gold.

In the 400m freestyle women, Bayelsa’s Ifiezegbe Gagbe set a new festival record by finishing in 5m:04s:30, and winning the gold medal ahead of Team Delta’s Okpochini Deborah and Cross River’s Dorcas Oka, who both finished second and third respectively.

Also, in the 100m freestyle men, Team Kano’s Collins Obi broke the dominance of Delta and Bayelsa by setting a new festival record of 53s:92, which beat the initial record of 54s:33 held by Ifeakachukwu Nmor of Delta State set in 2018.

Related Topics:swimmers at NSF
Up Next