Home » Graffiti » Within the Tears of Shettima 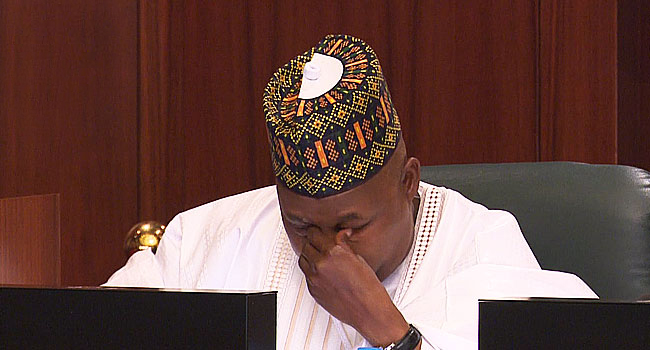 Nothing shatters and destabilises a nation like insecurity. No nation can make a meaningful and sustainable progress – politically, socially and economically – if the lives and property of its citizens are always in harm’s way. Insecurity is, in every dimension, a fast killer to the dreams of a nation. It surrenders a nation to the cold hands of anguish, regrets, poverty and death. It is universally known that the development of any given state is tied to its level of security. Thus, security is a sine qua non for a state to make developmental strides.

For years, insecurity has been the bane of the North-east geopolitical zone of Nigeria. This is as a result of the insurgency orchestrated by the Islamic Fundamentalist Sect – Boko Haram – which has caused wanton destruction of lives and property. Since July 2009 when the insurgency climbed to its apex, the zone has known no peace. It has been a tale of one bomb attack either in a church, school, mosque, government building or viewing centers. The 2014 kidnapping of 276 girls from Government Secondary School in Chibok town of Borno state brought to limelight the grave extent at which the sect can go in their acts of perpetrating evil.

When the President Muhammadu Buhari administration came on board on 29th May, 2015, Nigerians had high hopes that the insurgency will soon be history. However, the outrageous and monstrous activities of the sect continued unabated even when the presidency declared that they have been defeated – technically.

Borno state, recently, has witnessed intense attacks by the sect – attacks that have resulted in the capturing of towns – Baga, Bunduran, Kukawa, Doron-Baga, Kross Kawwa – which are major population centres in Kukawa Local Government Area of northern Borno. In showing an aspect of the kind of suffering the people of Borno were exposed to, a picture of a car carrying people, who were running away for their dear lives, with some of their belongings, was littered online. They were so jam-packed in the vehicle. Therefore, some were actually seated in the boot of the car and surprisingly, a goat was positioned at one corner. They were people who never imagined that they will be in such a terrible and inhuman condition. They have lost their loved ones, their homes and abandoned their means of livelihood. This is so pathetic, heartwrenching and pitiful.

Following this unwholesome and deleterious development, the governor of Borno state, Alhaji Kashim Shetttima, led a delegation comprising Borno elders; the National Security Adviser, Major General Babagana Monguno (RTD); Chief of Defense Staff, General Gabriel Olonisakin; Acting Director-General of the National Intelligence Agency, Ahmed Abubakar and the Director-General of Department for State Services, Mr Yussuf Bitchi to meet President Buhari – at the Council Chambers of the Presidential Villa. They were on a mission to implore the President to stop the insurgents who are on the rampage – attacking various towns in the state at will.

As Shettima read out their appeal to the President, his emotions overwhelmed him. He could not hold back tears from cascading down his cheeks. It was a very sorrowful sight to behold. “We are here because we thought that Allah will use you to fully reclaim Borno traditional glory of being the home of peace. We are here as a people who worked, prayed and waited for your presidency in the firm belief that with you as Commander-in-Chief, Boko Harm will become history in Borno”. He stated.

Read also: Bishop Kukah, MURIC and the Dilemma of Almajiris

The tears of Shettima symbolise the bad image that the Boko Haram terrorists have heaped on the state. The tears of the governor portray excessive loss of lives and massive destruction of infrastructure in the state. The tears of the number one citizen of the state – Borno – are an excellent demonstration of the hopelessness and helplessness that the people have been subjected to. His tears are a reflection of the exceedingly excruciating anguish that the women and children including men of the state are undergoing. The tears speak volumes of the depth of the tiredness and restlessness of the elders who went with him to meet the President.

More so, Shettima’s tears mirror the inability of the Buhari administration in keeping the state off the clutches of the insurgents. Shedding tears in front of the President x-rays the untold hardship he has passed through while governing the state – as no governor would have the needed cooperation and focus in dishing out the dividends of democracy while his state is a hotbed of terrorist attacks. The tears represent that the state still has a firm assurance that the President has what it takes to hunt down the terrorists in the state.

It is noteworthy to acknowledge that the National Security Adviser of the Federation, Major General Babagana Monguno (RTD), who was among the people that went to meet the President is from Borno state. This is a man whose work is chiefly to advise the President on security issues. I believe he might have dished out a plethora of strategies to the President on how to arrest the awful security situation in the state. I am assured that he has ransacked his brains and worked himself out in order to stop the insurgency in the state. I am confident that he has even gone out of his way to persuade the President to fortify the soldiers fighting the insurgents with good and adequate ammunition and also increase the number of troops. The afore-stated stem from the fact that as he is from Borno state, he will naturally have the strong drive to do all that are within and not within his powers to ensure that the state is freed from the claws of the Islamic Fundamentalist Sect.

The general elections are only a few weeks away. Elections cannot be conducted in a place with high security deficiencies. Electorates would be scared to come and queue at the polling units – bearing in mind that the sect might capitalise on the situation and waste lives. Thus, there is every need for the federal government to swing into action and crush the insurgents. There is a need for the federal government to wake up from its slumber and perform its cardinal responsibility of securing lives and property. There is a need for the Buhari administration to show Nigerians of their ability to arrest the security situation in Borno state and the entire North-east geopolitical zone by putting an end to the heinous and dastardly acts of Boko Haram.

Therefore, the tears of Shettima should be treated with a sense of urgency and respect. His tears should be seen as an act of braveness in the face of affliction and terror. They should be seen as a depiction of humility and exhibition of faith in President Buhari and his administration. They should be viewed from the lenses of a man who is poised, determined and eager to do all it takes to bring hope and succour to his state. The tears should serve as a pointer to the fact that Shettima cannot afford to sit back, cross his legs stylishly and watch Borno state fall like a pack of cards at the furious hands of Boko Haram. On this wise, it is imperative for the President not to disappoint him, the people of Borno state and Nigeria at large.