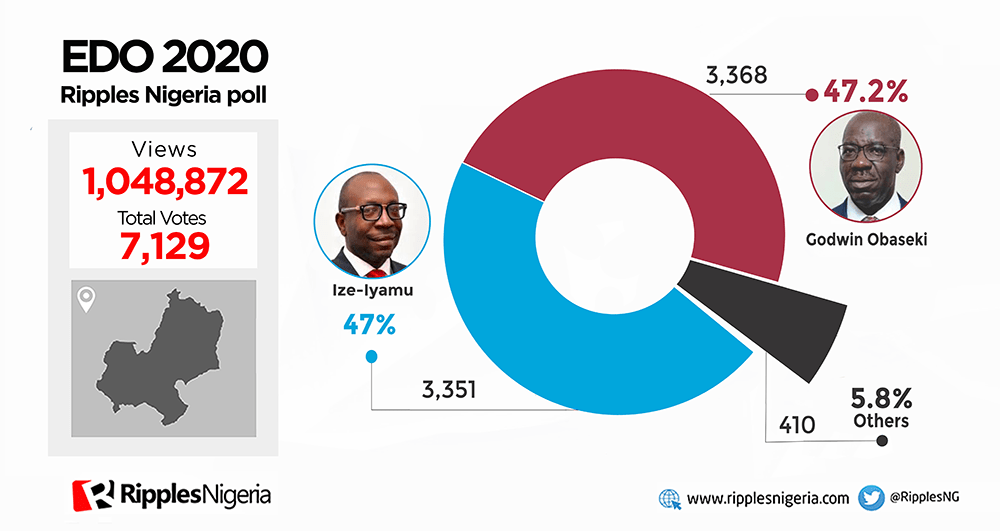 The September 19 governorship election in Edo might be the closest race ever in the history of the state, an opinion poll conducted by Ripples Nigeria suggests.

The survey, titled: ‘RIPPLESNIGERIA POLL: Who would you vote in the Edo guber election; Obaseki or Ize-Iyamu,’ was conducted on the Opinion Stage platform. It ran for a period of two months, beginning 27th of June 2020 with cut-off date of 3rd September, 2020.

Votes cast as at September 12

With a mere .02% separating the two front runners, the outcome suggests a possible keen contest between Obaseki, who is the candidate of the Peoples Democratic Party (PDP) and Ize-Iyamu of the All Progressives Congress (APC).

And, with a 5.8% return by other parties, the survey also confirms the vice-like grip of PDP and APC in Edo’s political space.

The Ripples Nigeria Poll is an open-access survey and we do not make any claims to its being scientific.

Data mined from the survey platform, Opinion Stage, do not capture location of respondents and we cannot, therefore, categorically state that those who voted in the poll were all residents of Edo state. The poll, as a tool for analysis, provides only a glimpse into popular sentiments regarding the election direction.

According to a recent report, 46% of respondents lack confidence in INEC’s ability to promote credible elections, 50% question the electoral umpires’ independence and 44% doubt the institutions’ preparedness for election.

How these insights speak to the eventual outcomes will depend on INEC’s management of the processes which is only seven days away.

The two dominant parties in the governorship race are guilty of violent rhetoric, hate speech, vandalism, and violence. YIAGA AFRICA reports that 1 out of 10 respondents has experienced violence directly, and that 1/3 have heard hate speech from candidates.

Potential flashpoints of violence have been identified in 13 of 18 Local Government Areas. They are:

Governor Obaseki had a fair share of the engagements in his favour but this is very unreliable in measuring possible votes for his party, as majority of Nigerians have proved overtime to be mere commentators who fail to vote on election day.

Though the survey predicts a very close contest, we cannot conveniently discount other extraneous factors that may work together to change the direction of voting and alter its final outcomes.

The structure of governance in Nigeria reserves so much power in the presidency and successive administrations have always been tempted to abuse the advantage.

Some of the very influential institutions of state that could impact the poll include the Independent National Electoral Commission (INEC), the military, Department of State Services (DSS), the Police and the Nigeria Security and Civil Defence Corps (NSCDC).

The result of a recent survey says about 48% of respondents are concerned violence may be instigated by security agents.

The main opposition party, PDP, has continued to make reference to Buhari’s powers as part of its campaign rhetorics. Whether Mr President would guarantee fair play, as pledged by him, remains a matter of conjecture.

The power of incumbency leaves Governor Obaseki with access to state resources. Same can be deployed to his advantage, especially in a process where vote buying has taken deep root.

However, chances that this factor could significantly affect outcomes remains slim as only 4% of respondents in a recent survey say they have experienced vote buying.

Rigging or manipulation of the electoral process has always been a recurring issue in Nigeria’s democratic journey, with accusations and counter accusations by parties.

In the Edo election, fears are already high on the possible incidence of rigging and manipulation of the processes as reports suggest that between 46% and 50% of respondents question INEC’s independence or lack confidence in its ability to promote credible elections.

Except things change positively, the party which is able to out-rig and or out-manipulate the other may carry the day.

The global COVID-19 pandemic may undermine the conduct and outcome of the September 19 election.

The protocols put in place by the Nigeria Centre for Disease Control (NCDC) as regards public gatherings and social distancing may hamper a large turn out of voters on election day.

A further dent on credibility and integrity is the disenfranchisement of many potential voters, as INEC failed to conduct the now traditional Continous Voters Registration (CVR).

What this translates to is that those who turned 18 years between the last CVR and now cannot participate in the Edo election despite being qualified.

Closely associated with this is the failure of INEC to distribute the remaining 483, 868 Permanent Voters Card (PVC). This, the umpire said was due to the COVID-19 pandemic.

The Ripples Nigeria poll suggests that the September 19 gubernatorial election would be too close to call, that is, if the integrity of the electoral process is not called to question.