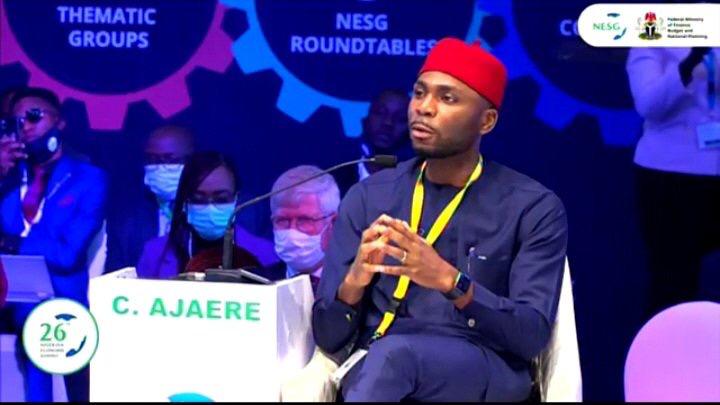 On Day 1 of the just-concluded 26th Nigerian Economic Summit (#NES26) organised by the Nigerian Economic Summit Group (NESG), Chidi Ajaere, Chairman of The GIG Group, a conglomerate housing businesses spanning transportation, logistics, oil and gas, and tech, challenged the audience, and indeed the nation, with his strategic plan to steer Nigeria away from multi-level underdevelopment.

Appearing on a panel with governors Aminu Tambuwal of Sokoto State and Kayode Fayemi of Ekiti State, as well as MainOne CEO, Funke Opeke, in the opening plenary of the summit, Mr Ajaere maximised a global platform to argue his case for rethinking the Nigerian development model. The plenary’s focus was ‘Nigeria’s Turning Point’, situated within the broader theme of the summit, ‘Building Partnerships for Resilience’.

Following typical pro-establishment contributions from governors Fayemi and Tambuwal as public sector representatives, Mr Ajaere quickly set the stage for what turned out to be a radical, innovative departure from the all-too-familiar conservative approach to addressing Nigeria’s problems by describing some of the oft-repeated contributions as another clear example of much talk, little action. He emphasised that to truly make progress, Nigerian leaders must realise that implementation and sustainability were key. Classifying the three stages of response to issues as ideation, implementation and sustainability, Mr Ajaere strongly argued that Nigerian leaders had all too often dissipated energy on ideation, while failing to commit sufficient effort towards implementation and, what he termed the most important stage, sustainability.

He criticised Nigerian leaders for being short-term thinkers, concerned mostly with what was in it for them today, without a clear appreciation of long-term strategic planning. Citing the GIG Group, Mr Ajaere shared how the leadership’s long-term strategic planning helped the group experience exponential growth over a 10-year period. This example, which drew enthusiastic applause from the diverse audience, underscored how much futuristic strategic planning is essential to development, and the degree to which failure to uphold it has plagued our severely ailing nation.

Tying the malaise of short-term thinking to policy inconsistency, Mr Ajaere addressed the recent reversal of import tariff on vehicles from 35% to 5% without due consultation with transport sector players. He branded the decision another clear example of “policy summersault” by the government, expressing the frustration of investors in the industry who had committed enormous resources based on the content and projections of the previous policy. He cited the case of one of GIG Group’s subsidiaries, JetSystems, which, alongside its partners, had already invested over five billion naira based on the now-sidelined automotive policy signed under former president Goodluck Jonathan. Pulling no punches, Mr Ajaere said the policy “made no sense” to him, directly challenging the Minister of Finance, Zainab Ahmed, and Vice President Yemi Osinbajo, who were both in attendance, for justification. Vice President Osinbajo would later attempt a response to Mr Ajaere which was feeble at best, failing to address the central issues of non-consultation with key industry players, public policy inconsistency, and misunderstanding of the true source of the huge cost stifling the transportation business in the country.

Having laid a strong, broad foundation for his strategic development proposal, Mr Ajaere then proceeded to share his six cardinal factors for transforming any nation. His ideas, wrapped in these principles, he revealed were drawn from years of studying development and leadership models around the world, particularly the examples of Japan and the Asian Tigers where sustained functional synergies have been developed between the private sector and the government. Referencing a local example of successful strategic collaboration, Mr Ajaere narrated how GIGM, the flagship subsidiary of the GIG Group, transformed the fortunes of Delta Line, the transportation company of the Delta State government, in less than two years since it was handed over to it.

Mr Ajaere’s six cardinal factors for orchestrating Nigeria’s shift to the path of accelerated progress include: visionary leadership, quality education, technology&innovation, security, infrastructure, and the economy. He argued that deliberate commitment to these vital areas would open a new chapter of success for the Nigerian nation. Stressing the value of each factor, he spoke passionately about why Nigeria cannot afford to wait any longer, noting that decades of failed promises had not only kept the country trapped in underdevelopment, but sadly and scarily placed it on the edge.

Linking his contributions to a cohesive body of ideas, Mr Ajaere addressed his central vision for Nigeria’s turning point. While acknowledging his status as a leader in business who also falls within Nigeria’s young demographic, he repeatedly maintained that he represented two sets of people on the panel —the business community and the youth— and argued that their moment had come. Speaking for the business community, he urged functional partnerships for development, calling for removal of the common barriers to strategic collaboration which, more often than not, emanated from the corridors of the public sector.

But it was perhaps in his representation of the youth that Mr Ajaere made his most passionate and moving appeal. He called for, nay demanded, greater youth inclusion in politics and governance at the highest levels. He argued that the youth, at the forefront of a new era shaped by technology and innovation, belonged on a different wavelength to the older generation that had long held the reins of power in Nigeria without much to show for it. As a tech enthusiast and investor, he used subtle humour and picturesque description to highlight the disconnect between Nigeria’s old guard still holding sway and the world in which they’re supposed to be leaders — a world constantly being disrupted by technology. The paradox, he argued, was clearly untenable.

Mr Ajaere authoritatively emphasised the urgency of the now, demanding that the youth develop a united front to challenge and defeat the status quo, instituting a new political order reflective of the dynamism of the new era. At his insistence, Governor Fayemi was compelled to summon an emergency meeting of the Nigerian Governors’ Forum with him in attendance to address issues he raised during the engaging conversation. Such was his resolve and powerful example of how not to let important moments for change pass.

Not wanting to succumb to blind optimism however, Mr Ajaere advocated for practical systemic reforms that would mandate greater youth inclusion in politics and governance. As one of the major supporters of the successful advocacy around the ‘Not Too Young To Run Bill’, so popularly called, he called for similar such constructive contributions to expanding opportunities for the youth.

As a major voice of influence, he did not fail to recognize the efforts of the youth through the #EndSARS movement, praising their resilience, urging continued struggle, while scolding the government for a brutal takedown of a lawful drive for change. As he noted, although the failed system gave birth to the movement, it cannot end it; only justice and radical reforms can create sustainable peace and cohesion, with the youth as active contributors.

Nigeria cannot afford to miss yet another turning point moment. Action, —strategic, constructive action— and not empty words, as Mr Ajaere insists, must be the new normal!

Anyone who touches Abaribe will incur our wrath —MASSOB warns