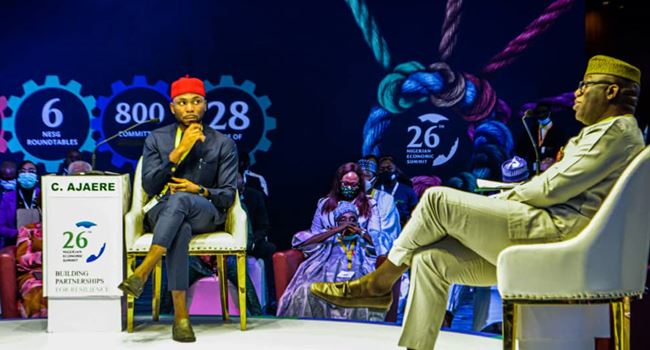 Vice President Yemi Osinbajo Monday provided the Federal Government’s response to the criticism of the government’s recent reversal of the policy on 35 percent levy on imported vehicles.

Mr. Chidi Ajaere, Chairman of The GIG Group, a business conglomerate housing businesses in transport, logistics, oil and gas, and technology, among others, had argued during his presentation at the 26th Nigerian Economic Summit (#NES26) organised by the Nigerian Economic Summit Group (NESG), that the federal government’s decision came as a shock to the GIG Group and other private sector players in the transportation industry as no consultation was made before the policy was announced.

He branded the development as another example of the government’s “policy summersault.”

He also expressed the frustration of private sector investors in the industry who had sunk in huge amounts of money based on projections from the prior policy by the government.

As a case in point, the Chairman of The GIG Group said his company, alongside its investment partners, had put in over N5billion into a local automobile assembly plant.

The new policy, he argued, had created a precarious situation for the investors.

Responding, Osinbajo, who acknowledged Mr. Ajaere’s argument about the need to preserve the local automotive industry and expand local capacity through knowledge transfer, however, said the policy was necessary.

The Vice President said the government was forced to reduce the tariffs due to the high cost of transportation.

He added that local assembly plants were not meeting local demands, hence the need for more importation.

Osinbajo, however, noted that the new policy would not displace plans to build local capacity in automobile production.

The Vice President further explained that the government will initiate a policy through the 2020 Finance Bill, which will make government buy only cars assembled in the country in an effort to make its auto manufacturing sector globally competitive.

Nigeria’s yearly car production is 14,000 whereas demand is in the region of 720,000, Vice President Yemi Osinbajo told participants at the 26th Nigerian Economic Summit Group Conference in Abuja on Monday.

“At current rate of production, we will not meet the serious national needs, which mean higher prices of vehicles and greater strain on other sectors of the economy that depend on transportation,” he added.

“With subsidy removal and the increase in fuel price and the pass-through to food prices, transportation costs have to be reduced,” Osinbajo said.

Ajaere, however, faulted Osinbajo on the real factors driving rising prices, especially as it relates to the movement of goods and passengers.

According to him, “What increases cost of transportation is high cost of petrol, unbearable cost of vehicle maintenance due to bad roads, and poor infrastructure.”

He bemoaned the high cost of doing business which he argued is a disincentive to investors. “Imagine paying on the average N1.2m to move a 40ft container from Apapa to Ajah in Lagos due to ineffeciency of the Nigerian ports,” he said

He added, “And, even if we are to accept the figures bandied by the VP, then that is the more reason local manufacturers should be encouraged to enjoy economies of scale. Nigerians have the capacity. We need to keep our money local and not encourage capital flight.”

Also at the session were governors of Ekiti State, Kayode Fayemi and Governor Aminu Tambuwal of Sokoto State.