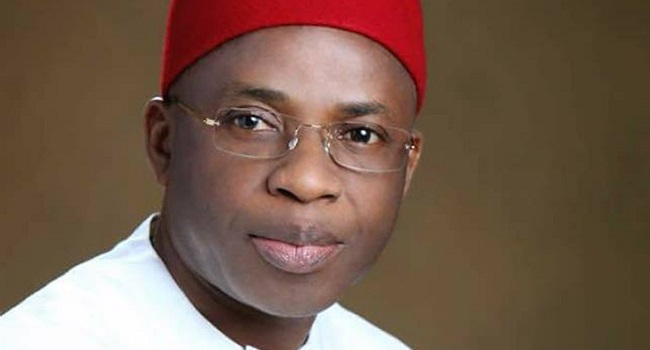 The former governor of Imo state, Ikedi Ohakim, on Tuesday, confirmed attacks on his convoy by gunmen, leading to the death of four police officers, on Monday.

Ohakim, who spoke to newsmen in Owerri, said it was his bulletproof car that saved him and his two children.

Ohakim was attacked by gunmen in a place called Umualumaku while driving between Isiala Mbano and Ehime Mbano Local Government Areas of Imo state.

Narrating his ordeals, the former governor said the dastardly incident was beyond IPOB agitations, alluding to the proliferation of professional criminals in the region.

He said: “We were driving between Isiala Mbano and Ehime Mbano. These people blocked us at a place called Umualumaku. They attacked us from behind and were firing at our vehicles consistently. I thought I was a dead man and I was with two of my children – my son and daughter.

“They pursued us and continued firing at our tyres. Luckily, the vehicle has what is called run-flat tyres on which you can continue driving even after a puncture. So, even when they shot at the tyres hoping to immobilise us, the vehicle continued moving. If they were ordinary tyres and the vehicle had stopped, they would have cornered and finished us.

“But the tyres held on until we got back home. We drove for about 20 minutes before we got home. That was the saving grace.

“This goes beyond the Indigenous People of Biafra (IPOB), I must say. These are professionals, well-trained criminals. They are not ordinary people. They were driving a blue colour BMW 5-series car, brand new. They came to kill me.”

“I don’t know what this is all about. It is becoming terrible. Won’t people come home again? Are we going to stay in Owerri and Abuja permanently without coming back to our communities?”

Imo and other states in the southeast had come under systemic attacks by criminals in the last few years.

This development had led to the death of several people, including a former presidential aide, Ahmed Gulak and Dr Chike Akunyili, husband of the late former Director-General of the National Agency for Food and Drug Administration and Control (NAFDAC), Dora Akunyili.

2023 POLLS: Crack in the Miyetti Allah leadership over endorsement of Tinubu