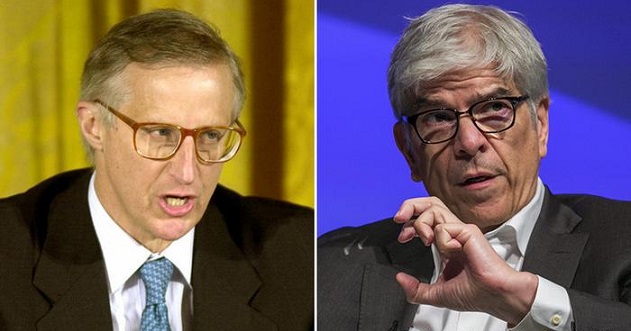 The 2018 Nobel Economics Prize has been won by two US economists, William Nordhaus and Paul Romer for constructing “green growth” models that show how innovation and climate policies can be integrated with economic growth.

Working independently, they have addressed “some of our time’s most basic and pressing questions about how we create long-term sustained and sustainable growth,” the Royal Swedish Academy of Sciences said on Monday.

According to the academy, their models, both developed in the 1990s, have “significantly broadened the scope of economic analysis”.

“The policies are lagging very, very far — miles, miles, miles — behind the science,” Nordhaus, a professor at Yale University, told the Swedish Academy, referring to US President Donald Trump’s withdrawal from the Paris climate accord.

“We are actually going backwards in the United States with the disastrous policies of the Trump administration,” the 77-year-old added.

“I think its really anomalous in the United States, this degree of hostility to environmental policy… all I can do is hope that we get through this without too much damage,” he told reporters at Yale, after teaching a class as normal despite finding out earlier he had won from his daughter.

Romer, 62, a former World Bank chief economist now at New York University’s Stern School of Business, on his part, said he was confident the world could reduce greenhouse gas emissions and still improve standards of living in the future.

“We can absolutely make substantial progress to protecting the environment, and without giving up the chance for sustained growth,” he said.

“What’s a little bit troubling, even though I remain very optimistic about technological possibilities, is that it seems as though we’re starting to lose our commitment to the facts,” he told a news conference in New York.

The jury said Nordhaus and Romer’s findings “have brought us considerably closer to answering the question of how we can achieve sustained and sustainable global economic growth.”

His “integrated assessment model” is now widely “used to simulate how the economy and climate co-evolve” and to examine the consequences of climate policy interventions, for example carbon taxes.

Nordhaus’s research shows that the most efficient remedy for problems caused by greenhouse gas emissions is a global scheme of carbon taxes uniformly imposed on all countries.

Countries refusing to take part in the scheme could be subjected to customs tariffs.

“There’s a lot of momentum here, it’s like a super tanker, that it takes a long time to slow it down, but I think it’s something we can do,” Nordhaus said when asked if he was hopeful about reversing the effects of climate change.

Complementing Nordhaus’s research, the jury said Romer laid the foundation for “endogenous growth theory”, which explains how ideas are different from other goods and require specific conditions to thrive.

His research demonstrated how economic forces govern the willingness of companies to produce new ideas and innovations.

Romer resigned from the World Bank in January 2018 after raising questions about how the institution was ranking countries.

Both winners, tipped as Nobel frontrunners in recent years, will share the nine million Swedish kronor (about $1.01 million or 860,000-euro) prize.

The prize, which also consists of a diploma and a gold medal, will be presented at a ceremony in Stockholm on December 10.