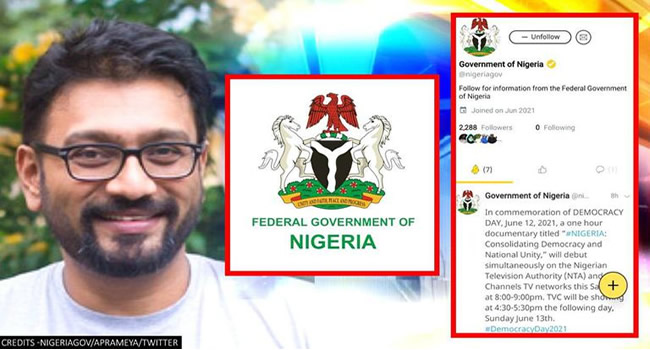 The Nigerian Government has unveiled its social media account on Indian Koo App, just a week after placing an indefinite suspension on Twitter.

Ripples Nigeria gathered that shortly after the ban, Koo had announced that it was available in Nigeria and was working to add local languages on its platform.

Co-founder of Koo, Aprameya Radhakrishna on Thursday tweeted a ‘warm welcome’ to the official handle of the Government of Nigeria. Tagging Mayank Bidawakta, his partner in setting up the app, he expressed delight about the platform ‘spreading wings beyond India’.

“A very warm welcome to the official handle of the Government of Nigeria on @kooindia! Spreading wings beyond India now.”

This was after he had tweeted on June 5 that Koo was available in Nigeria and that they were contemplating enabling the local languages.

“Koo is available in Nigeria. We’re thinking of enabling the local languages there too. What say?,” Radhakrishna tweeted.

The Nigeria government had accused Twitter of double standards as it banned the Jack Dorsey-led company on June 2.

This was in response to the platform deleting President Muhammadu Buhari’s tweet.

READ ALSO: PDP urges UK, US, others to impose visa ban on Buhari over Twitter ban

Nigeria’s Minister of Information and Culture Lai Mohammed had expressed condemnation at the ‘persistent use’ of Twitter for actions that could allegedly undermine Nigeria’s corporate existence.

This means the federal government has discarded Nigeria’s homemade social media app owned by Adamu Garba, a former presidential aspirant under the All Progressives Congress (APC).

In response to the ban on Twitter, Garba had tweeted, “Twitter has no right to infuse into our local political affairs. It’s a company not a government”.

The APC chieftain urged the federal government to ban the use of the bird app in Nigeria. He tweeted: “By removing our democratically elected President’s speech to the people of Nigeria, Twitter needs to shutdown from Nigerian internet space. Twitter needs to get out of Nigeria,”

Campaigning for his CrowweApp, Garba in another post said: “President Muhammadu Buhari and his entire cabinet, including all Govt related social handles should consider using @CrowweApp.”

“We grow our local brand and perfect it by using and supporting it. Since we have local content rules, @CrowweApp is there to protect our national integrity.”

Yousign secures $36.6m to build DocuSign alternative. 2 other things and a trivia