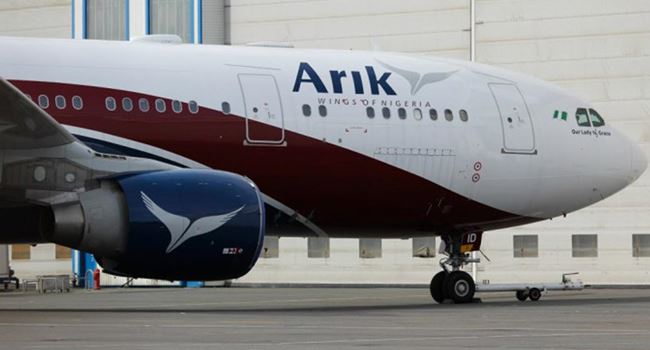 An undisclosed number of Arik Air pilots have been sacked by the management of the company for alleged gross acts of indiscipline, following an unplanned strike that didn’t go down well with the airline.

Arik Air stated that the pilots didn’t provide strike notice before downing tools, a move the management said was against labour laws. It was gathered that procedure to make known their demands were ignored.

Ola also stated that Arik Air wasn’t aware, hence, the sack of the protesting pilots, whose actions was described as “spontaneous and callous.”

The sack, it was gathered, has led to the cancellation of some Arik Air flights during the yuletide period, which the company considered as a revenue boost period.

“Arik Air finds it rather treacherous of the Pilots to contemplate a strike action at this Yuletide season which is the peak period for airlines all over the world. They peddle for naught the reputation and financial health of the company,” The airline said on Thursday.

Ola added that, “It is instructive to note that the management of the airline has of late had very fruitful discussions with relevant aviation unions including the National Association of Airline Pilots and Engineers (NAAPE), on conditions of service for all employees. This has led to the signing of a robust condition of service and redundancy benefits for staff.”

The statement further reads, “While great efforts have been made to minimize the impact of the illegal strike action, some fully booked flights have had to be canceled.

“Arik Air regrets the inconvenience caused by this action and is doing everything in its powers to minimize the impact and discomfort to its esteemed customers.”