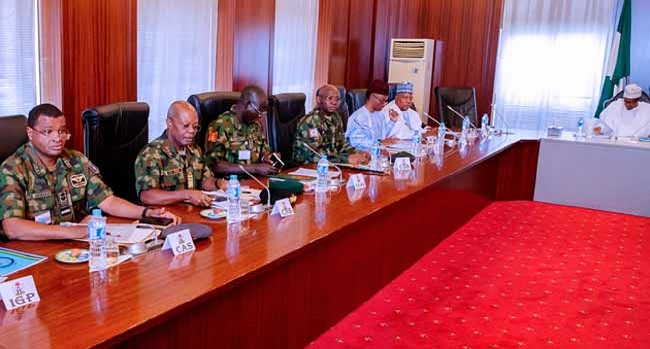 President Muhammadu Buhari is currently holding an emergency security meeting at the state house, with service chiefs, including the National Security Adviser (NSA), Babagana Monguno the Inspector General of Police, IGP, Mohammed Adamu and governors of some select northern states.

The governors in attendance are Jubrilla Bindow of Adamawa, Kashim Shettima of Borno and Nasir el-Rufai of Kaduna State.

Although the agenda of the meeting has not been disclosed, it  may address security preparations ahead of the fast approaching 2019 general elections.

This is ahead of a string of security challenges that have trailed the elections, including the killing of 37 bandits in Zamfara, Boko Haram terrorists attack on a Nigerian Army base in Yobe and gunmen attack on a Kaduna community.

The Nigeria army subsequently responded saying “If the Commander-in-Chief has given order to the Nigerian Army to that effect, be rest assured that order will be totally and effectively obeyed without any ifs or buts.”

Also at the meeting are the Minister of Defense, Dan Monsur-Alli, Minister of Interior, Abdulrahman Dangazzau, the Director General of Department of State Service, DSS, Yusuf Bauchi and some other security heads.