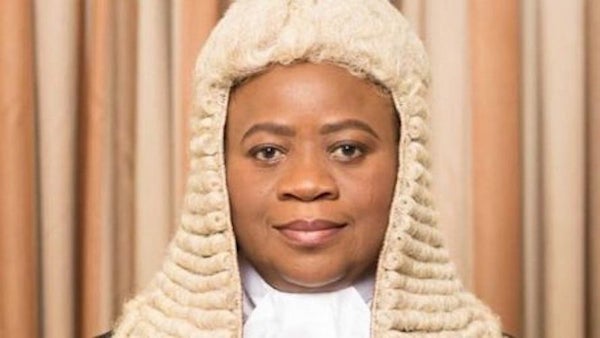 The Ecumenical Youths Association (ECA), has condemned the delay in the confirmation of Honourable Justice Monica Bolna’an Dongban-Mensem as the President of the Court of Appeal.

The group also claimed that the refusal of the President to send the name of Justice Dongban-Mensem to the Senate for confirmation after serving in acting capacity for the first three months, was because of her Christian faith.

The group, which also called on former presidents Olusegun Obasanjo, Goodluck Jonathan and other well meaning Nigerians to prevail on President Buhari to send the name of the acting Appeal President to the Senate for confirmation, stated this in a statement by its President, Daboikiabo Warmate Z. Warmate, on Saturday.

The statement reads: “We are compelled to once again issue this statement on the unfriendly and unfavourable disposition, inaction and action of President Muhammadu Buhari (GCFR) towards Christians and those occupying sensitive position in his government, has become an open secret.

“We condemn and reject the deliberate refusal to confirm Hon. Justice Monica Bolna’an Dongban-Mensem for religious and political reasons as the substantive President of the Court of Appeal because she is a Christian, and this is just one case among many.

“Hon. Justice M. B. Dongban-Mensem whose tenure was just extended rather than confirmed for a period of three months effective June 3, 2020, in acting capacity as President of the Court of Appeal by President Buhari in a press release is quite suspicious because, she is eminently qualify and clean by all standard with her intimidating and impeccably impressive credential.

“She deserves to be confirmed as the substantive Appeal Court President haven been nominated by the National Judicial Council (NJC) in consonance with the constitution of the Federal Republic of Nigeria.

“She is an authority in many fields namely: Criminal and Civil procedure law, Taxation and International Public Finance Law, Public and International law, Legislative drafting, Constitutional and Administrative law and International Commercial transactions, et al. As at December 2019, Hon. Justice M. B. Dongban-Mensem had over one hundred and fifty (150) lead and contributory judgments respectively. Her LL.B and LL.M degrees are both from the prestigious Ahmadu Bello University, Zaria.

“The delay in the confirmation of such a person, we believe, is a time buying strategy to ensure that she is not confirmed as the President of the Court of Appeal and that has raised our curiosity, anxiety and suspicion.

“If our suspicion is incorrect, why was she not confirmed after the three months period of her acting? What are the President’s reasons for not sending her name to the Senate for confirmation the same time he sent other of his appointees? But the same President has since sent the name of one of his appointee Mr. Lamido Yuguda, the new Director General of the Security and Exchange Commission (SEC) to the Senate, which the President of the Senate Mr. Ahmad Lawan read during the plenary session on Tuesday, May 19, 2020, in a letter requesting the upper chamber to confirm him.

“In acting capacity, her performance is limited as such, she is administratively strangulated and the judiciary at that level is subjugated.

“Preliminary Investigation has revealed that, several attempts have been made to move her to the Supreme Court as one of the Justices, out of an evil ploy to deny a Christian the Presidency of the Court of Appeal. Having failed in that, the plotters are not relenting in their plot; they are now trying to cook up stories in order to discredit her so she does not emerge at the expiration of the three months. Just the same way, the former acting Chief Justice of Kebbi State, Hon. Justice Elizabeth Asabe Karatu was denied confirmation in 2017 because of her Christian faith. And the former Chief Justice of Nigeria Hon. Justice Walter Samuel Nkanu Onnoghen was wrongly removed on frivolous trump up charges.

“We are urging Hon. Justice M. B. Dongban-Mensem to continue to remain upright and not to accept any blackmail that will force her to resign.

“In same vein we are calling on Christian Association of Nigeria (CAN), Christian Elders Forum (CEF), All Christian Youths, Former President Olusegun M. A. Obasanjo, GCFR; former President Goodluck E. Jonathan, GCFR; Gen. T. Y. Danjuma and all well meaning Nigerians to prevail on President Muhammedu Buhari to confirm her with out further delay, if he does not have any hidden agenda to bring in a Muslim to replace her.

“We will resist every and any attempt to deny a Christian that is qualified the Presidency of the Court of Appeal. We advise President Buhari not to allow Nigeria to be dragged into religious crisis.”