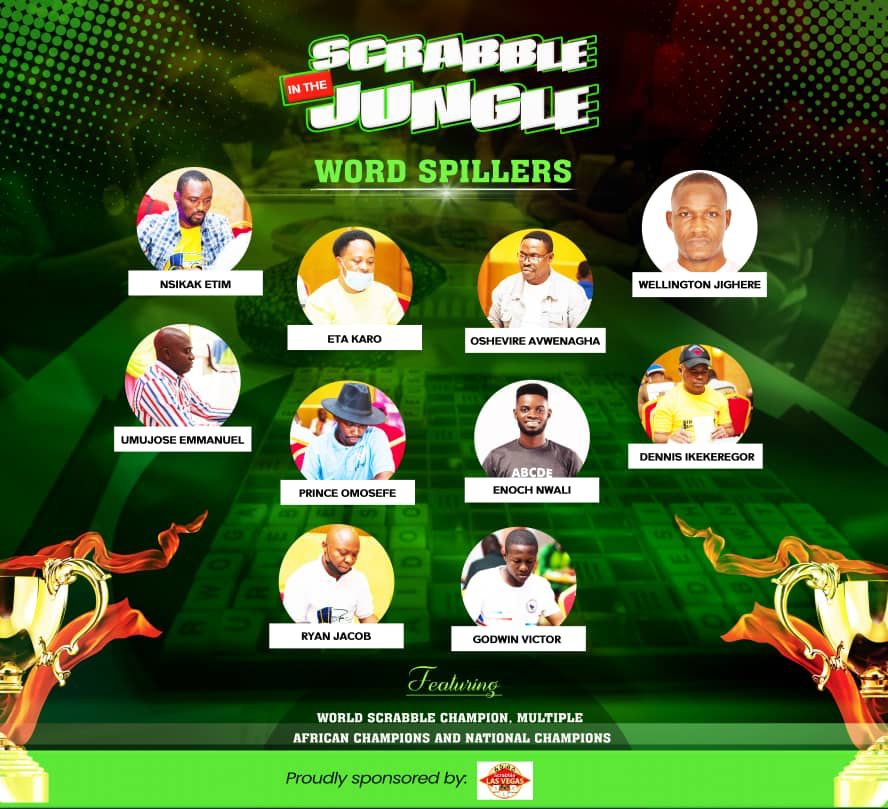 Organiser of the maiden edition of the “Scrabble In The Jungle”, Scrabble Las Vegas has unveiled a rich-cast of 10 participants selected for the tournament with former World Champion Wellington Jighere top on the list.

The first of the series which will hold in Asaba, Delta State in the South-South region of the country, will witness top-class exchanges among the eligible players from the 26 to 28 of this month.

First of the pick was 2015 World Champion Wellington Jighere who became the only African to win the coveted title while representing the country.

The “World Champ” who many have already seen as the King in the waiting would need to apply all his guile on the board to make the dream a reality.

Hugging the list next is 2011 African champion Nsikak Etim whose dexterity on the scrabble board has earned him a massive reputation among his high-end rivals.

In the mix also is Eta Karo, winner of the 2022 West Africa Scrabble Tournament who was also confirmed as one of glory hunters in this unique tournament.

Another tough contender on the card is home-boy Oshevire Avwenagha.

“Chevy” is a well-known formidable jammer whose fierce skills and competitiveness can be intimidating.

A Young Gun on the board, Enoch Nwali’s mastery of word combinations and calculative skills has earned him a fine respect from the establishment.

The 2022 EEAST champion’s inclusion by the organisers is a clear indication that he has what it takes to rumble in the Jungle.

Also making the cut is Prince Omosefe who is seeking to use this rare opportunity to carve a mindgame history for himself.

The “Word Spillers,” according to the organisers, Scrabble Las Vegas, will engaged each other in 36 round of games which consists of 180 games.

Musa Olasupo, the President of Scrabble Las Vegas while giving out details on how enthusiasts can follow the tournament, said: “the Scrabble in the Jungle series will deliver a new scrabble experience that will bring us closer to every move made through live reporting across 5 WhatsApp ‘screens’.

“A 3,000 naira subscription is required for fans to watch and follow the progress of their star players. We believe this will make it more affordable and you will also see this as your contribution towards supporting the live reporting channels. We will extend same opportunity to the International Scrabble family at $10.”