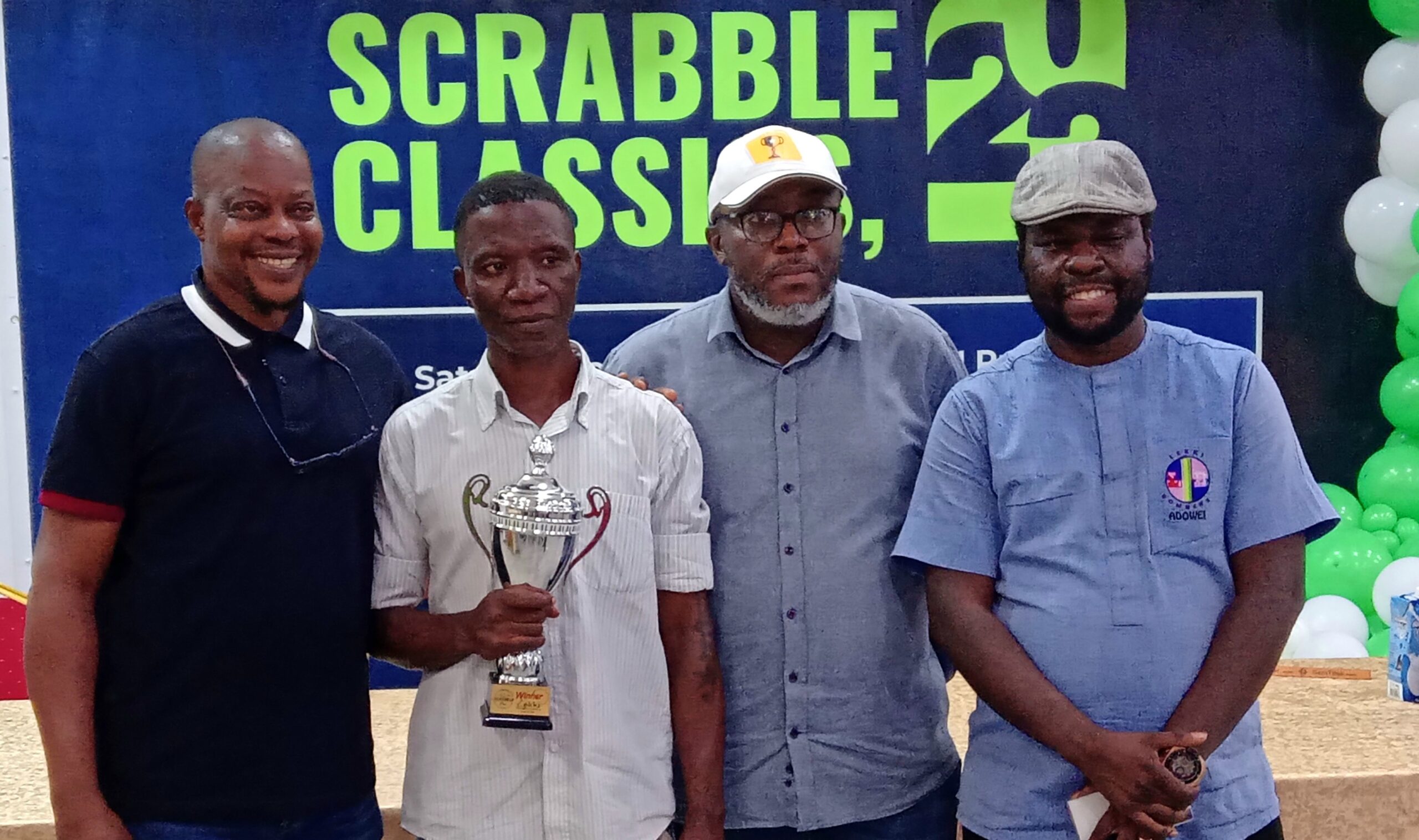 James Ewruje confirmed his new status as the champion of the newly rebranded Lekki Scrabble Classics over the weekend.

The Master player claimed the overall title and emerged the best among the 100 players who competed over 12 games at the one-day tournament.

Ewruje shrugged off the challenges of tournament top favourite Tega Okiemute of Delta State in the last round to cement his pole-position on the log with 11 wins, one defeat and a spread of 599 cumulative points.

The defeat would be costly as Okiemute tumbled to the fourth position at the end.

Ogun State-based Gbadebo Olufemi rallied to second position with 10 wins and two defeats plus 466 cumulative points after a win over a highly impressive Monday Christopher on Table 2 in round 12.

Coming on his heels was Khaleel Adedeji who recorded the same number of wins and defeats but dropped to third position with an inferior cumulative points of 370.

In other spot prizes won, Bukunmi Afolayan picked the Best Female title while Philip Akhabue was rewarded with a complete scrabble kit as the youngest player.

David Ogedengbe got a surprise cash gift from the organisers for putting on a green and white shirt in commemoration of the 62nd Independence Day Anniversary.

Speaking at the tournament which was held in an atmosphere of conviviality, a trademark of the club’s events, Captain of Lekki Scrabble Club Ebikeme Adowei said the Lekki Scrabble Classics was able to tick some critical boxes due to the quality of minds who share the same vision with one another at the club.

“We are all commonly bonded in our passion for scrabble” he confessed, “and so we decided to have this periodic event, which is a bi-annual event so that we can gather the creme-de-la creme of scrabble in Nigeria to compete, have fun and win prizes.”

“I’m glad we have this level of competition to offer scrabble players and we hope to sustain this. We are hoping that corporate organisations will key into this initiative to grow the game of scrabble not only football, basketball but mental sports like scrabble and chess.”

South-West Zonal Coordinator of the Nigeria Scrabble Federation (NSF) Emmanuel Egbele who incidentally is a member of the club said the tournament has met his expectations considering the huge number of players, the ambience, the high level of competition and friendly feeling amongst the players.

He said the Classics has impacted on the players’ mind skills as they prepare for the National Sports Festival and the Africa Scrabble Championship (ASC) taking place in Lusaka, Zambia this month.

Lagos State Scrabble and Monopoly Association Chairman Engr. Dipo Akanbi said the Lekki Scrabble Classics has become a kind of Mecca for players around the country due to the offerings available.

He said the open nature of the event was critical in solidifying the sports as newbies will tend to play the more established players in all categories.

He highlighted the strategic role the LSC as a competition has played in preparing some of the players who will represent the country at the Africa Scrabble Championship (ASC) in Zambia this month.

In the same vein, NSF Players Representative, Segun Durojaiye said the tournament’s role in the development of players cannot be over emphasised.

He observed that the open status of the tournament has been a training ground for the younger ones as well as those who have been out of the circuit for sometime to get back in the game including students who have been at home due to the prolonged strike by the Association Staff Union of University (ASUU) to get involved after studying for a long period of time.

He added that high number of entries in Lagos as well as the plenty players who registered for the Abuja National Opens which was held simultaneously, signified that the growth of the sports was not abating.

Both tournaments served as testing grounds for some of the players who will be in Lagos for Finale Matchday of the Mindgames Scrabble Premier League and the Patrons Cup.

The Lekki Scrabble Classics had players from different clubs from Lagos, Ogun, Osun, Oyo, Ondo, Delta and Niger States who participated at the successful event.