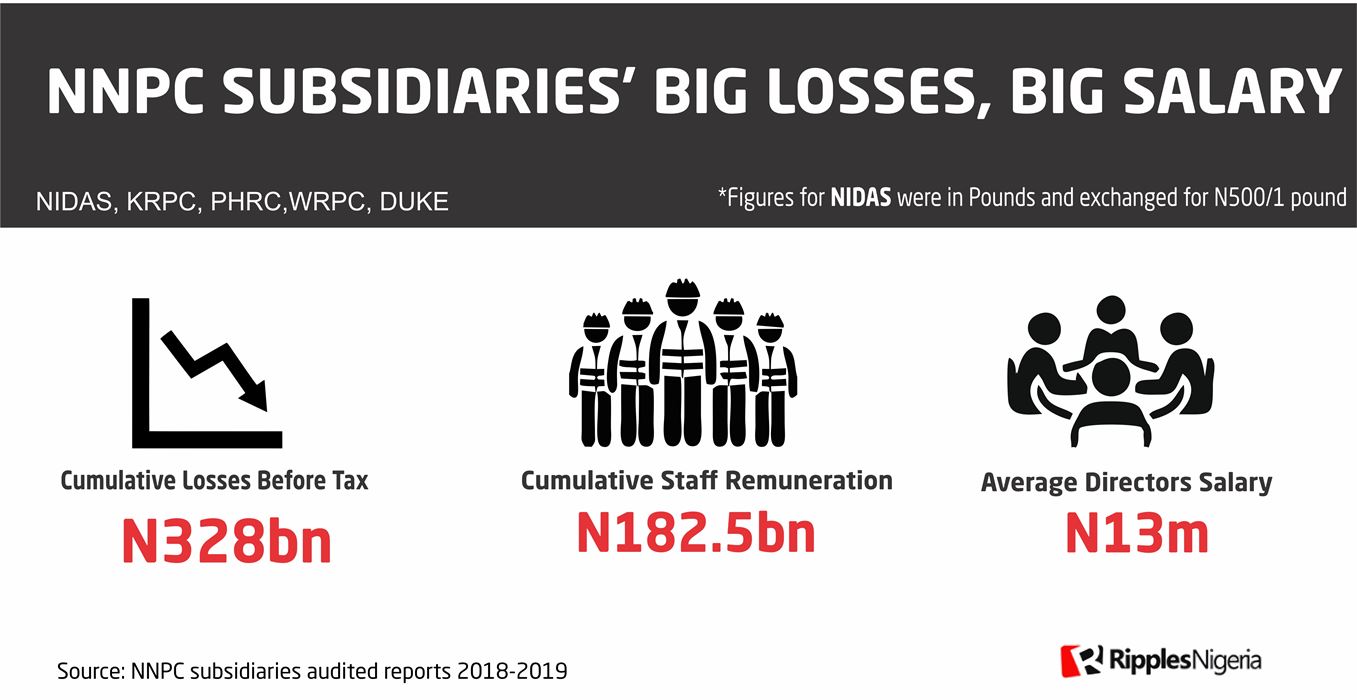 The aforementioned NNPC subsidiaries for two years have returned combined losses before taxation of over N328.6 billion. Yet, within the same period, the salaries, wages and other benefits of employees, directors have gulped N182.5 billion.

Ripples Nigeria findings show that NIDAS, PHRC and Duke Global energy all increased the wages and benefits of their staff in 2019 from the previous year.

Port Harcourt refinery, which during the period under review produced no fuel and recorded a loss of N91 billion, raised the payment made as salary and benefits for staff by 2.01 percent to N22.2 billion, from N21.76 billion the previous year.

Duke Global Energy two years consecutive losses, amounting to N113.9 million, had little impact on the decision to increase spending on workers emoluments by 6.50 percent to N397.4 million, from N373.1 million in 2018.

Another, NIDAS, a subsidiary established to provide marine transportation of crude oil and petroleum products along the deep sea, coastal and inland waterways in its financial of 2019 recorded a loss of N79.2 million.

However, for an employee of NIDAS, it was a good year as salary allocation and other benefits jumped by 63.0 percent to 279 million, from N171 million spent the previous year.

Among the mentioned subsidiaries only Kaduna and Warri refineries committed less to workers remuneration when compared to the previous year.

Kaduna posted N34.5 billion while for the Warri refinery N30.8 billion was paid as salaries, benefits to their staff. In 2018, the salaries, wages and allowances of workers were valued N39 billion (Kaduna) and N32 billion (Warri).

It is important to note that if the comprehensive losses in the books of the mentioned NNPC subsidiaries were taken to account the losses would have been higher.

The cumulative remuneration of directors and other expenses of PHRC , KRPC and WRPC refineries in the last two years is over N2 billion despite losses and no single drop of fuel to show for it.

Kaduna refinery directors got the highest pay package of N1.2 billion within the period. In 2018, N531 million was paid to directors while in 2019 the figure jumped to N675.5 million.

Despite losses, NIDAS directors also deemed it fit to increase their pay package by 180.7 percent within two years. In 2018 the directors of the struggling NNPC subsidiary went home with 7,268 pounds but as of 2019 their remuneration increased to 20,405 pounds.

Only Duke global financials was not clear on how much its directors received during the period under review.

Most of the directors could be earning more than the president

A further review of the salary structure of NNPC subsidiaries with losses showed most of the directors could be earning more than the President of Nigeria.

According to Revenue Mobilisation Allocation and Fiscal Commission (RMAFC), President Muhammudu Buhari receives a total salary package of N1.17 million monthly. This sum is inclusive of a basic monthly salary of N292,892, a hardship allowance of N146,446 monthly, and a consistency allowance of N732,230 per month.

Compared to Kaduna Refinery highest paid director that went home N33 million in 2018. However, this dropped to N8 million in 2019.

Also, Warri refinery clearly stated that four of its directors in 2019 earned above N13 million the same amount earned in 2018.

In fact, in 2017 the highest paid director at the refinery went home with over N80 million as emoluments despite losses recorded during the periods.

The Port harcourt refinery is no different as four directors got at least N12 million and above as remuneration in the two years under review.

Implication of the losses on Nigerian economy

NNPC as a parent company is entitled to enjoy profits in the form of dividends from the subsidiaries.

However, due to the losses incurred none of the subsidiaries mentioned has been able to make a single dividend payment, depriving the federal government of the needed resources.

In fact, a total of 18 NNPC subsidiaries’ dividends valued at over N1 trillion went unpaid in 2019.