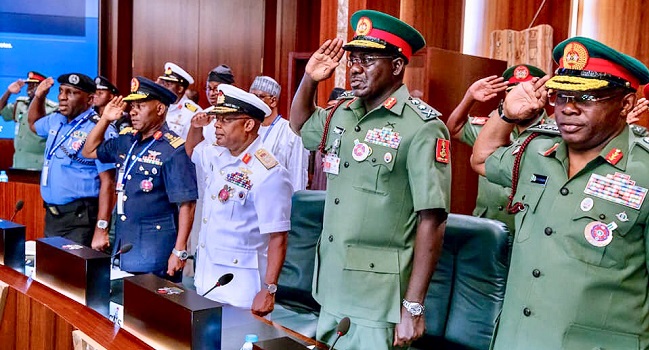 Social media users in Nigeria have continued to place more value on topics of national importance, and Tuesday was no exception.

Most of the discussions challenged unpopular government policies especially as regards the deteriorating state of security in the country. The following trended on Twitter:

Lawmakers on Tuesday called for the sack of Nigeria’s service chiefs and for a total revamp of the country’s security architecture following the killing of 43 farmers in Borno State by Boko Haram insurgents.

The motion was earlier raised by the former Borno state governor, Senator Kashim Shettima, who urged President Muhammadu Buhari to replace the current service chiefs with fresh minds as they had lost any iota of legitimacy for failing to protect the lives of citizens.

The Senate President, Ahmad Lawan, who reteriated the recommendation, stated that the security chiefs had over-stayed their welcome and asked that a probe panel be set up to investigate allegations of corruption within the security architecture.

Meanwhile, Presidential spokesperson, Garba Shehu had earlier urged Nigerians to clamp down on the clamour for the sack of the service chiefs, saying it was “out of place” since the president who had the prerogative to dismiss the service chiefs was pleased with their performance so far.

Nigerians had these to say on social media:

To all of you asking for the sack of the service chiefs, Garba Shehuu has given you all the middle finger.

He says Buhari is very satisfied with the service chiefs. So no need for all the noise.

To these people,
The North is safe and secure,
Nigeria is prosperous and booming.

Senate want Oga Buhari to fire service chiefs but men of the Green Chamber want Buhari to appear before them over killings in Borno but I know that none of the requests will be granted as both upper and lower chamber can't even say nothing in Buhari's presence.

Twitter Nigeria has considered disturbing, the perceived fondness between Nigeria and Niger Republic following the re-arrest of the fleeing Ex-chairman of the defunct Pension Reformed Task Team, Abdulrasheed Maina in the West African country.

The Economic and Financial Crimes Commission (EFCC) told the court on Monday that it had earlier reached out to the United States and Niger Republic for assistance in the arrest of Maina.

Nigeria’s antecedent ‘romance’ with Niger Republic especially the Lagos-Kano-Katsina rail construction to Marradi and the recent move by the Nigerian government to begin the importation of fuel from the country has continued to raise suspicions on social Media.

Someone should check buhari's office if someone typed Niger Republic instead of Republic of Nigeria in those documents!

The way Niger Republic has been in the news for a while now, one would think it is a state in Nigeria.
Nigeria building railway to Niger

Concerned Nigerians raised a hastag calling for the exoneration of Rights activist and Convener of the #RevolutionNow movement, Omoyele Sowore from all sanctions against his freedom following bail conditions which confined him to the Federal Capital Territory, Abuja and restricted from speaking to the press.

The outspoken journalist was arrested in 2019 and detained severally by the Nigerian State Security Services (SSS) for alleged treason after calling for a nationwide protest against the government on August 5.

Sowore’s prolonged trial necessitated the hastag which trended for the most part of the day.

Imprisoned for more than 4 months, under city arrest for more than 11 months, denied access to family for more than 15 months, all for calling a peaceful protest! @YeleSowore must not spend another Christmas without access to his family. Drop all charges against him.#FreeSowore pic.twitter.com/n9yYESOASq

Happy New Month. Dec 10th & 11th is another date with the oppressors as we will storm Federal High Court Abuja in solidarity with @YeleSowore & @IamMandate . Enough of the tactics of using adjournment at every sittings to further restrict them to Abuja & Oshogbo. #FreeSowore pic.twitter.com/SHfRueW5SM

Sowore is on a mission to deliver Nigeria via peaceful protest but buhari hates to see Nigerians saved.#RevolutionNow#FreeSowore pic.twitter.com/0akc6ZZwB4

Nigerians also reacted to the Senate’s approval of Professor Mahmood Yakubu’s second tenure as boss of Independent National Electoral Commission (INEC), following considerations of the reports presented by the Senate committee on INEC, chaired by Senator Kabiru Gaya endorsing him as suitable for the position.

They have gathered again to confirm d INEC chairman for their intention for 2023… God will take control.