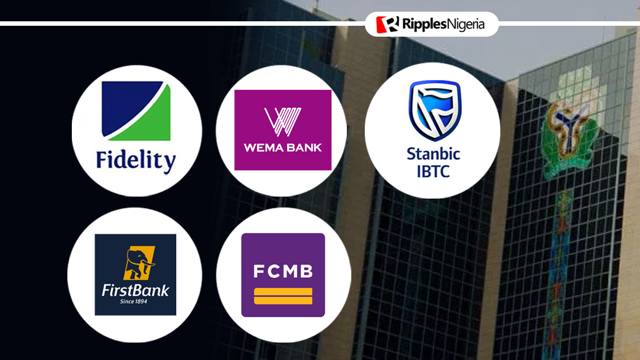 The second-tier banks continued to dominate the top five best-performing financial institutions in Nigeria, with only one tier-one bank making it into the list in the third quarter (Q3) of 2022.

Ripples Nigeria quarterly ranking for best performing commercial banks operating in Nigeria is determined by the growth of the financial institutions’ Net Interest Income within three months, with that of Q1 falling between January to March, Q2; April to June, Q3; July to September and Q4; October to December.

Net Interest Income is the balance from turnover of interest-bearing assets, such as corporate, personal and other type of loans, as well as cost of servicing liabilities like customers’ deposits.

Ripples Nigeria’s analysis showed that the 12 creditors recorded 33.55% growth in Net Interest Income, which closed the third quarter of 2022 with N718.83 billion, representing N180.58 billion gain, when compared to the N538.24 billion reported during the corresponding period of Q3 2021.

(3) Fidelity Bank improved on its growth rate in Q3 2022. It remains the only lender to post Net Interest Income growth above 100% in the second quarter (112.06%) and third quarter. The firm didn’t make it into the top five list in Q1 after recording 4.3% increase.

(4) The least performing lenders or bottom five couldn’t achieve a 30% growth during the period in review;

Fidelity Bank was the best-performing bank in the third quarter of 2022, after its Net Interest Income grew by 147.03% year-on-year when the N14.65 billion reported in Q3 last year is compared to the N36.21 billion same period this year.

• It followed the Net Interest Income growth up with a 61.70% increase in its bottom line.

Analysis shows that First Bank’s Net Interest Income for Q3 this year increased by 63.38% after the company generated N96.62 billion, against the N59.13 billion the commercial bank reported for Q3 2021.

• On its profit after tax, First Bank posted impressive growth of 1162.42% in the net profit.

• Ripples Nigeria gathered that FBN Holdings generated N34.66 billion as profit after tax in Q3 2022, significantly above the N2.74 billion recorded during the same period in Q3 2021.

In the third quarter of 2022, Wema Bank was the third best-performing bank after growing Net Interest Income by 50.41% year-on-year.

According to the financials obtained, Wema Bank’s Net Interest Income increased by N5.11 billion to close the period last year at N15.25 billion, above the N10.14 billion reported in Q3 2021.

FCMB closed Q3 2022 as the fourth best-performing creditor, as its Net Interest Income rose by 46.87% after the company generated N32.88 billion, in contrast to the N22.39 billion it recorded in the corresponding period of third quarter 2021.

• At the end of third quarter, FCMB managed to grow its bottom line to N9.25 billion.

Stanbic IBTC ended the period as the fifth best-performing bank, posting 38.79% growth in the Net Interest Income. This raised the lender’s Net Interest Income to N29.30 billion in Q3 this year, in contrast to last year’s N21.11 billion.

• Stanbic IBTC extended the growth drive to the net profit, growing the bottom line by 40.85% year-on-year according to analysis.

• The growth indicated that Stanbic IBTC’s profit after tax rose to N17.40 billion in the third quarter of 2022, above the N17.40 billion reported in the year before.