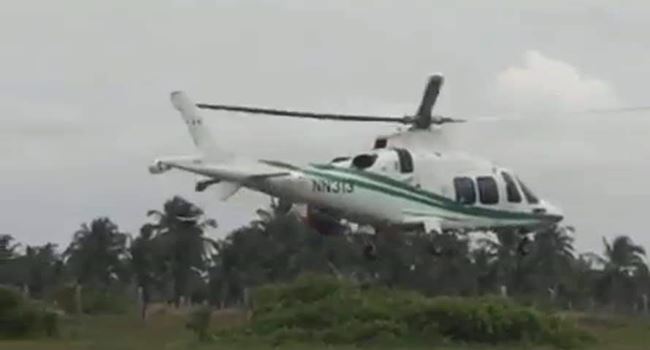 Claim: A viral video showed a helicopter landing in a forest location, and claimed it was dropping arms for bandits to wreak havoc in South-West region.

Source: The viral video which started making rounds on Thursday last week on WhatsApp was traced to several facebook pages including that of Chidi Cali, a supporter of the Peoples Democratic Party also known for spreading messages regarding Biafra. The handle claimed that the helicopter belonged to the Nigeria Maritime Administration and Security Agency (NIMASA) and that the agency has no business doing surveillance in the forest except it had a hidden agenda.

It went ahead to add screenshots of news reports where a suspect confessed that a helicopter is used to drop arms for them. He concluded that the NN 313 helicopter in the video is not an isolated case.

NIMASA procured three Leonardo AW109SP helicopters which were delivered May 14, 2021.

However, the helicopter with green white green stripes on the body and registration number shown in the video belongs to the Nigerian Navy and not the Maritime agency. The Nigerian Navy is the only arm of the military or paramilitary allowed to use the acronym NN (Nigeria Navy).

Also the location of the helicopter was later confirmed to be in Magbon, Badagry.

In the video, the helicopter neither dropped off anything nor did anyone come out of it. It simply landed and moved off after a little while.

Air Commodore Suleiman Dahun, the Nigerian Navy spokesperson when contacted, refuted the claim. He said the helicopter was theirs and it was there for military training and not to undermine national security.

“If we want to go for training we take permission from the lagos control tower and fly there, land and do other manoeuvres and come back. How does it amount to carrying arms to terrorists or bandits?”, Dahun asked.

Conclusion: The video was true to have been shot in Nigeria’s South-West region, but the message being passed along with it is false. The helicopter does not belong to NIMASA but to the Nigerian Navy.

Related Topics:#featuredBanditsHELICOPTERNIMASASouth West
Up Next

FACT CHECK… Have the abductors of Greenfield University students been arrested?