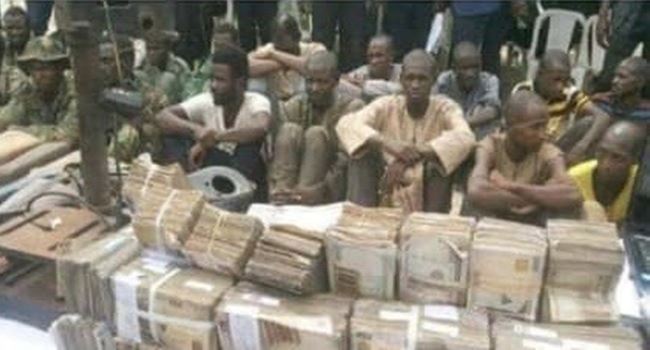 Claim: Those who abducted students from Greenfield University, and released them after collecting ransom have been arrested with their loot

Source: A viral image of suspects with a pile of money and different types of guns in front of them being paraded by the police at a press conference was shared on June 9 as pictures of gunmen who abducted some students from Greenfield university.

The picture came with the message “Just IN: To God be the glory, Kidnappers of Greenfield University Students caught with their ransom. Fight on Nigeria, Fight on”.

The month of April saw 20 students and two staff of Greenfield University, Kaduna Sate abducted. While one was released, five of them were killed and about a month later in May, 14 others were released with three of them remaining in captivity.

The picture with the message was traced to a Twitter user with the same message. In the same light, Joe Igbokwe, special adviser to Lagos State governor, Babajide Sanwo-Olu on Drainage and Water resources posted the same picture on his Facebook timeline whole paying respect to Nigeria security officers for the feat.

In tracing the picture, Ripples Nigeria found that it was from a news report of police arresting kidnappers of a Sokoto businessman where the police recover N10.1 million and eight riffles from the kidnappers published October 22, 2019. Here is a video of the parade

“I have been inundated with calls, messages, and emails to confirm if the bandits responsible for the kidnapping of the Greenfield University’s students have been arrested. While it is our desire to see this happen by the grace of God, I cannot confirm the story making the rounds, and I have not received any information related to this from security agencies.”

Conclusion: The kidnappers have not been arrested. The image is an old one regurgitated for fake news.

FACT CHECK… Did Buhari lift 10.5 million Nigerians out of poverty in two years?

FACT CHECK: Did a helicopter drop arms for bandits in South-West?