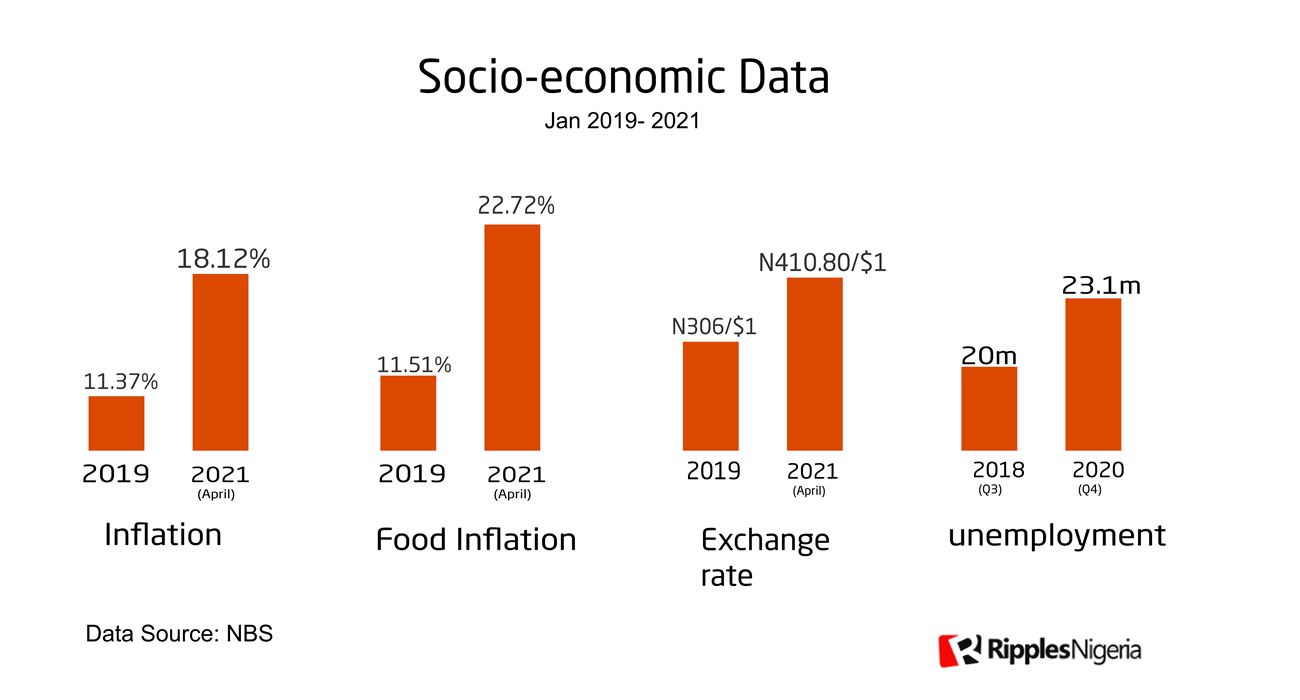 Claim: President Muhammadu Buhari made a bold claim on Saturday that his administration had lifted 10.5 million Nigerians out of poverty in the past two years.

The president said this in his speech to mark June 12 Democracy Day while highlighting the successes of his administration and the challenges it faces.

“Our over-all economic target of lifting 100 million Nigerians out of poverty in 10 years is our goal notwithstanding COVID-19.

“In the last two years we lifted 10.5 million people out of poverty – farmers, small-scale traders, artisans, market women and the like,” Mr Buhari said of the successes of his administration’s economic programmes.

“I am very convinced that this 100 million target can be met and this informed the development of a National Poverty Reduction with Growth Strategy. The specific details of this accelerated strategy will be unveiled shortly,” the President added.

Despite the strong claim of President Buhari, given the effects of the COVID-19 epidemic and growing insecurity, his assertion did not appear to be supported by all government figures including that of the World Bank.

In fact, Ripples Nigeria hours of fact-finding reveals a plethora of other socioeconomic data indicating that poverty is actually on the rise.

The key indicators used are:

According to the National Bureau of Statistics, in its 2019 poverty and inequality in Nigeria report, there are at least 83 million Nigerians living below the national poverty line.

From the time the last poverty report was produced, the Nigerian economy has experience a recession in the second and third quarters of 2020. It was not until the fourth quarter that the economy posted a 0.11 percent growth rate in real terms.

The growth was sustained in the first quarter of 2021 at 0.51 percent but a rate too sluggish to meet the needs of a population that is growing at a 3.2 percent annual pace according to NBS as at 2018.

Data from NBS show since the last quarter of 2015, the economy has not risen higher than 2.5 percent.

According to the World Bank, in order to erase poverty, the Nigerian economy must outrun population growth, which does not appear to be the case.

The World Bank even stated that around 2 million Nigerians are anticipated to slip into poverty by 2020 as population expansion outpaces economic growth.

“With COVID-19, the recession is likely to push an additional 5 million Nigerians into poverty in 2020, bringing the total newly poor to 7 million this year,” worldbank added.

Also data posted by the World Poverty Clock website, show that since 2018, at least 13.4 million Nigerians have been pushed into extreme poverty.

Read also: FACT CHECK… Have the abductors of Greenfield University students been arrested?

The World Poverty Clock is a website that provides real-time poverty estimates and it is funded by the International Fund for Agricultural Development (IFAD) and the Federal Ministry for Economic Cooperation and Development of Germany.

The website, on its methodology, said it analyzes publicly accessible statistics on income distribution, productivity, and consumption supplied by several international institutions, including the World Bank’s PovCal database and the International Monetary Fund, to arrive at his estimates.

During the same time period, inflation (item prices) an indicator to how money loses buying power, climbed from 11.37 percent January 2019 to 18.12 percent in April 2021.

In fact, food price which is a major component of determining poverty level of a country’s population has increased by 68 percent. As at January 2019, food inflation was at 13.51 percent increasing to 22.72 percent as at the end of April 2021.

Over 23.1 million Nigerians are presently jobless in real terms, up from 20.9 million at the end of the third quarter of 2018.

Also in his speech, President Buhari noted, “Our conditional cash transfer program has benefited over 1.6 million poor and vulnerable households comprising more than 8 million individuals. This provides a monthly stipend of N10,000 per household.”

Conditional cash transfer is one of President Buhari’s main Social Investment Programmes (SIP) aimed at alleviating the plight of 100 million Nigerians over the next ten years.

However, the N10,000 when calculated is N120,000 yearly, this is in fact less than the N137,430 annual consumer expenditure per person required to live over the poverty line.

NBS in its poverty report noted, “individuals living in households whose consumption expenditures is below 137,430 Naira per person are considered poor by national standards.”

With the aforementioned facts and growing insecurity in the country, along with the impacts of Covid-19, there are several gaps in understanding how 10 million Nigerians were lifted out of poverty.

No clear evidence to show Buhari lifted 10.5 million Nigerians out of poverty in two years.

FACT CHECK…Did the Fulani kill 50 people in Oyo State, as shared by Fani-Kayode?

FACT CHECK… Have the abductors of Greenfield University students been arrested?