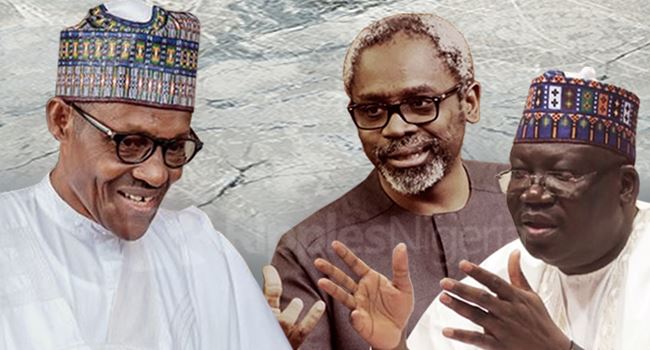 A slap, a frown

The Speaker of the House of Representatives, Femi Gbajabiamila, on September 20, 2019, invited service chiefs to discuss the bad security situation in the country despite the claims of success publicized by the military. It was also meant to serve as a forum to appraise how the lawmakers could help security agencies financially ahead of the arrival of the 2020 Appropriation Bill at the National Assembly.

Most of the service chiefs, however, failed to honour the invitation but sent representatives.

That late morning, the Speaker, with visible contours on his forehead and laced with a frown, looked every inch a frustrated man. Looking straight at the assemblage of uniformed military officers, Gbajabiamila did not mince words in expressing his disapproval over the absence of the service chiefs and added that there was no call placed to his office to explain their absence.

“I am just seeing their accountants and representatives,” he said.

While commending the Inspector General of Police, Mohammed Adamu; the Comptroller General of Nigerian Immigration Service, Muhammed Babandede and the Director-General of Department State Security, Yusuf Bichi for their attendance, he said: “But let me say that as the House is an institution, I cannot understate my disappointment at the rest of the service chiefs that are not here.”

Shall we tell Buhari?

Gbajabiamila could not mask his annoyance over the absence of the service chiefs. He asserted that the service chiefs had disdain for the lawmakers and were not troubled about the deepening insecurity in the country.

“I know one or two of these service chiefs were somewhere yesterday night, I can almost say that it showed the disdain for the institution,” he said.

In a show of solidarity, and expression of his frustration at the unacceptable behaviour of the service chiefs, the Deputy Speaker, Idris Wase, averred that he took the development as an insult to the legislative institution.

“I am insulted and I feel insulted that this leadership would make a pronouncement and say ‘come, let us discuss the problem that is affecting our country’ but the same people who are in charge of security, coordinating it, the active officers who are supposed to be on the field are not here. I want to say that it should not be tolerated,” he stated.

Gbajabiamila, fed up with the dishonour, vowed to report the service chiefs to President Muhammadu Buhari.

Sounding helpless was one issue that got critics very disturbed. Indeed, in different quarters, people were disappointed with his resolve to take the matter to the President instead of handling it as an independent arm of the government .

Underneath the threat, however, appeared to be an interplay of forces. What later followed may provide an insight into a game of power play.

Usman noted that Gbajabiamila did not have the power to summon the service chiefs and that his only motivation could have been to milk them financially.

“He does not possess the powers he attempted to exercise over the military. It is often an extortion racket, something they use to blackmail the invited persons to pay bribes to lawmakers from the budget of their organisations. It is on record that even when the public officers in question do appear before the House or its Committees, it is often the subordinate officers with jurisdiction for the areas of interest that eventually answer all the question being posed,” he stated.

The service chiefs – except the Chief of Army Staff and Inspector General of Police – however, met with the House on September 23, 2019, in a closed door meeting. The Chief of Defence Staff, General Abayomi Olonisakin, apologized for not being at the meeting scheduled for an earlier date, he said it was not out of disrespect to the House.

Read also: ASO ROCK WATCH: Osinbajo’s head on the chop board, Buhari’s loud silence; 3 other things that rocked the presidency

“We are here to listen to the security concerns of the House and address them with the support of the legislature,” he averred.

It is thought that the service chiefs might not have honoured the invitation if Gbajabiamila had not issued the threat of reporting them to the President. Thus, this cast a spell of doubts on whether the legislature could truly perform its duties without recourse to the President.

The question on the lips of many, therefore, is whether the 9th National Assembly leadership, as feared, would not  turn out to be a rubber-stamp legislature. These concerns had been heightened by the pronouncement of the Senate President, Ahmad Lawan, when he said that the Senate will not fail President Buhari.

Lawan, from his days in the defunct All Nigeria Peoples Party (ANPP), had always been an ally of President Buhari and never hid his loyalty to the President even before he emerged the President of the Senate.

Lawan would, however, not take criticisms of his beggarly posture before Buhari lying low. “There is nothing like rubberstamp. Of course, I won’t deny it. I am a President Buhari man. I am. My support for the President must not be misconstrued as going to make the National Assembly a rubberstamp assembly.”

Despite this claim, eyes are still raised in doubt on the ability of the Lawan-led Senate to walk the independent route, especially when images of the deputy Senate President, Ovie Omo-Agege, kneeling before Buhari on June 11, 2019, flashes on the political scene. Omo-Agege had knelt to greet the President after his election into the leadership of the Senate.

Reno Omokri, an ardent critic of the ruling party, in reaction, had tweeted: “When we have a Deputy Senate President KNEELING DOWN to greet @MBuhari, how can we expect the 9th National Assembly to STAND UP to him? The Legislature was created to CHECK the Executive, not to BOW to them. Kneel to God and parents only. Very sad!”

The dusts raised by Omo-Agege, Lawan and Gbajabiamila are yet to fully settle. The disposition of the leadership of the National Assembly, though not unexpected, leaves serious concerns in the minds of watchers of Nigerian democracy.

The expectations of many are that the lawmakers will rise above party affiliations and advance the nation’s interests ahead of any petty, sectional or narrow interests. The independence of the legislature and judiciary must fit perfectly into the democratic jigsaw, otherwise, ‘Baba-has-said’ will remain a constant refrain in Nigeria’s governance culture.