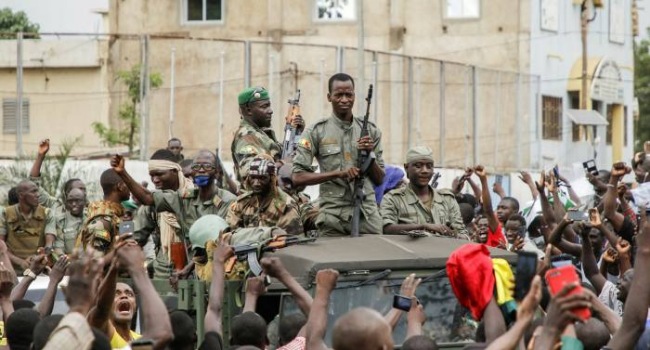 Military officers who staged a coup in Mali that forced the resignation of President Ibrahim Boubacar Keita, pledged on Wednesday to form a civilian transitional government to quickly organize fresh elections.

Dressed in combat fatigues and sat behind a wooden desk, five soldiers appeared on state television earlier on.
The spokesman for the mutineers, Col Wague, who call themselves the National Committee for the Salvation of the People, said they had decided to act to prevent Mali from falling further into chaos.

“We are keen on the stability of the country, which will allow us to organise general elections to allow Mali to equip itself with strong institutions within the reasonable time limit,” he said.
Hours earlier, Mr. Keita resigned and said parliament would be dissolved on state television after the renegade soldiers had detained him and top officials from his government.

The addresses confirmed that a faction of Mali’s military had seized the levers of government after months of political turmoil, and plunge the strategically important U.S. ally in the fight against jihadist extremism into a new crisis.

The coup has been condemned by Mali’s Western and regional allies—including the U.S. and France, the former colonial power in the West African country—all of which had backed Mr. Keita despite his sliding popularity.

The European Union on Wednesday, called for a diplomatic transition in the country.

The African Union condemned the coup plotters. West African leaders called on the military to return to their positions, with the 15-nation West African regional bloc ECOWAS urging the rogue soldiers to stand down “without delay.”

BLASPHEMY: CAN reacts on death sentence ruling on Kano singer