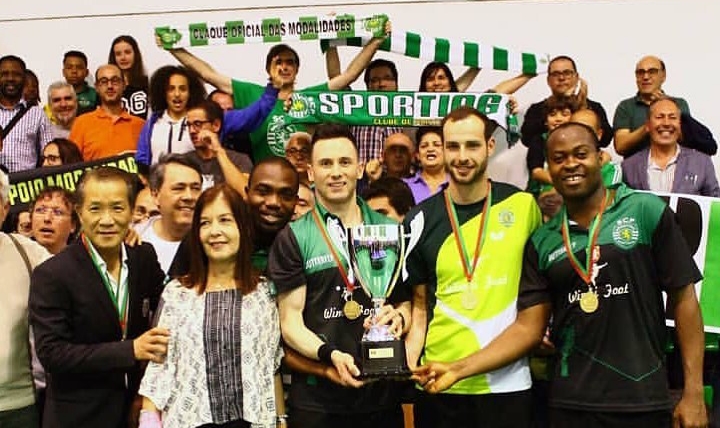 The champions emerged after they beat Sao Roque CD 3-0 in the second leg of the play-off final held at the Multipurpose Room of the Stadium of Alvalade in Lisbon.

Since joining the Lisbon-based team, Aruna Quadri has been making it to the podium in the Portuguese elite league alongside his compatriot – Abiodun and this becomes his fourth consecutive title with the Portuguese champions.

Quadri was in action for the team when they defeated their opponent 3-0 in the second leg played on Friday May 17 after a narrow 3-2 win in the first leg of the play-off final played on Wednesday May 14.

In the first leg, Sporting beat CD São Roque (STAG) 3-2 in the first game of the Play-off Final of the Men’s National Championship of the 1st Division held in Madeira to have an edge going into the second leg.

The first leg lasted for more than three hours, with home team – CD Sao Rome could not get their rhythm in the doubles match involving Nuno Henriques and Tiago Li against Sporting Aruna Quadri and Diogo Carvalho as they were losing 2-0, but they recovered and ended up winning by 3-2 ((5-11, 5-11, 12-10, 11-8 , 11-4), putting the result in 1-0 for the home team.

Diogo Carvalho tied the game with a 3-0 (6-11, 6-11, 10-12) win over Nuno Henriques and everything was decided in the last match between Zhao Tianming and João Monteiro.