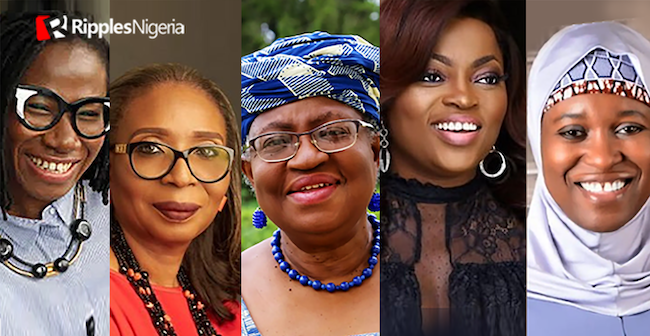 The international women’s day is a day designated to review the contribution of women to nation building and influence across various walks of life.

The 21st century woman is more than a housewife, they are major players and share holders in affecting policies of a state.

Here is a list established to celebrate women who have been excellent in their fields and have given hope and purpose to the younger generation.

Ripples Nigeria compiled the names of ten women who are teaching the next generation that through hard work, dedication and patience, the sky is only the starting point.

Ngozi Okonjo-Iweala is a Nigerian-American economist and international development expert who has served since March 1, 2021 as Director-General of the World Trade Organization.

She is the first woman and the first African to hold the office.

43-year-old Chimamanda Ngozi Adichie is a Nigerian writer whose works range from novels to short stories to nonfiction.

She has remained an advocate for gender equality in Nigeria and across the world. Her TedEx speech ‘We should all be feminist ‘ was sampled by American songstress, Beyonce in 2012.

Aisha Yesufu is a Nigerian socio-political activist, and co-convener of the Bring Back Our Girls Movement, an advocacy group that brings attention to the abduction of over 200 girls, from a secondary school in Chibok, Nigeria, on 14 April 2014, by the terrorist group Boko Haram.

In 2020, she also agitated against the government during the #EndSars protest in Nigeria. She has since been identified as one of the most quintessential figures in modern times.

Funke Akindele is easily one of the most popular names in the Nigerian movie industry. Often eulogized for her diversity and creativity, she has been applauded for creating one of the most memorable  characters in recent years and also promoting new talents via her various comedy series, Jenifa’s Diary and Industreet.

Funke starred in the sitcom I Need to Know from 1998 to 2002, and in 2009 she won the Africa Movie Academy Award for Best Actress in a Leading Role.

Her most recent project, Omo Ghetto 2 is also the bestselling Nollywood movie, selling over 500 million copies since its release during the festive period in 2020.

Ibukun Awosika is currently serving as the Chairman of First Bank of Nigeria Plc.

She is a businesswoman, author and motivational speaker.

On September 7, 2015, Ibukun became the first woman to be appointed Chairman of First Bank of Nigeria following the resignation of Prince Ajibola Afonja.

She is member of IESE’s International Advisory Board (IAB) and also sits on the board of Digital Jewel Limited and Cadbury Nig Plc.

She also recently starred in the 2020 film “Citation” alongside Temi Otedola produced by Kunle Afolayan.

The appointment of Yemisi Edun is in a bid to fill the void left by Nuru, who proceeded on a voluntary leave to ensure sanctity in the bank’s investigation of charges against him.

Yemisi Edun was the immediate past Chief Financial Officer of the Bank; a role she held after serving in various capacities in the bank since joining in 2000.

Nwapa Adaobi is a General Manager, Zenith Bank Plc. She is currently the Group Zonal Head, Ikoyi Zone, with management and supervisory responsibilities over branches and business units in the zone.

Adobi joined Zenith Bank in 1990 and has over twenty-eight (28) years cognate banking experience, most of which have been in Senior Management positions.

The 38-year-old Nigerian recording artiste, also a multi-instrumentalist exposed young African women to the beauty of independence and belief in one’s intuition and creativity.

Asa has four studio albums to her name.

Tara Fela-Durotoye is a Nigerian beauty entrepreneur and lawyer.

A pioneer in the bridal makeup profession in Nigeria, she launched the first bridal directory in 1999, set up international standard makeup studios and established the first makeup school in Nigeria.

She is the founder of House of Tara.

She started gaining media attention after the 2020 End SARS protest that was targetted at ending police brutality in Nigeria.

The protest which lasted for days, later metamorphosed into a call for better governance.

Rinu was very active during the protest and within a short while, she started getting famous on the Nigerian social media platforms, especially on Twitter.