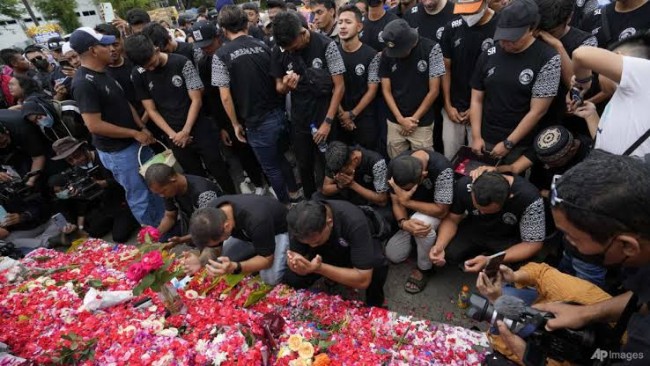 Indonesian authorities have confirmed that 32 children were among those who died in a stadium stampede during a league match between Arema FC and Persebaya Surabaya at the Kanjuruhan stadium in the city of Malang on Saturday.

An official at the Asian country’s Women’s Empowerment and Child Protection Ministry said in an interview on Monday that at least 32 children died in the crush, with the youngest between three and four years old.

“From the latest data we received, out of 125 people who died in the accident, 32 of them were children, with the youngest being a toddler age three or four,” the official who goes by the name Nahar, said.

A police statement also said 323 people were injured in the stampede, with some of them in critical conditions in hospitals.

The tragedy on Saturday night which has been recorded as one of the world’s deadliest sporting stadium disasters, occurred when angry fans of Arema who were losing 3-2 at home, stormed the pitch and attacked match officials and players ofthe visiting team and bitter rivals.

To disperse the crowd, the police released canisters of teargas as they tried to force fans to return to the stands after two officers were killed.

Many of the victims were trampled or choked to death, according to police.

A rescue official said some of the 42,000 Arema fans flung bottles and other missiles at players and officials and at least five police vehicles were toppled and set alight outside the stadium.

“Riot police trying to stop the violence fired tear gas in the stadium, triggering panic in the crowd and sparking the crush as they stampeded for the exits,” the rescue worker said.

The police say they are still questioning witnesses and analysing footage from 32 security cameras inside and outside the stadium and nine mobile phones owned by the victims, as part of the investigation to identify suspects.

Related Topics:Indonesia stadium stamped
Up Next