Home » Politics » ASO ROCK WATCH: A season of doublespeak. 2 other things that shook the political space 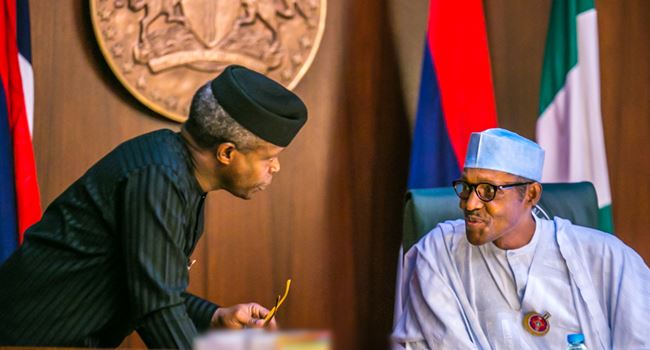 The perceived soured relationship between President Muhammadu Buhari and Vice President Yemi Osinbajo dominated national discourse last week. It has been so for a while.

The preceding week, it was Buhari’s signing of a bill in London, United Kingdom, where he had supposedly traveled to for a ‘private visit’ that kept Nigerians talking. The decision to hand-carry a document all the way to UK appeared to have watered the arguments that things were no longer at ease between the president and his deputy.

While that was yet to settle, what followed was the sack of 35 aides of the embattled vice president, a development that further left Nigerians pondering how and when the ever-unfolding drama in Aso Rock would end.

Though many keen observers were not the least surprised at the latest development, the presidency’s double speak in the aftermath of the mass purge left most observers jolted.

The news of the aides’ disengagement had started as a rumour on Wednesday. By Thursday, the presidency told Nigerians, “A list circulating in the media on the so-called sacked presidential aides is not genuine and ought to be ignored.” Osinbajo’s Senior Special Assistant (SSA) on media and publicity, Mr Laolu Akande, had stated that on his twitter handle.

However, to the chagrin of many, on Friday, Buhari’s spokesman, Garba Shehu, confirmed that the Wednesday rumour, which the presidency had earlier asked Nigerians to ignore, was indeed true.

According to Shehu, the aides were sacked owing to government’s efforts to streamline decision-making, cut down multiple authorities and reduce cost of administration.

“The Presidency wishes to confirm that there is, ongoing, an unprecedented overhaul of the nation’s seat of government, arising from which a number of political appointments have either been revoked or not renewed in the Second Term.

“The exercise, which has been ordered by the President, is to streamline decision-making, cut down multiple authorities and reduce the cost of administration,” Shehu had partly said.

The troubling questions that follow, naturally, revolve around how the presidency rates the intelligence of its citizens. What manner of strategy supports denying a claim only to acknowledge its authenticity twenty-four hours later? Indeed, are we to assume that the same presidency thinks or believes that its people are programmed to forget so easily? Most importantly, one wonders what reputation mileage the presidency intended to gain by resorting to doublespeak on the sack matter

For many analysts, the sack of Osinbajo’s aides and the reasons adduced by the presidency may have succeeded in clearing any doubts about the existence of intrigues and power play at the seat of power.

The question on the lips of many is what next for Osinbajo as he appears to be befuddled daily with a menu of well scripted initiatives to diminish his portfolio.

The drama many believe is still unfolding and no one can possibly guess what may follow next.

A few mischief makers have rhetorically asked if Osinbajo wants to wait until he is locked out of Aso Rock. In the face of mounting scathing remarks, the Vice President has maintained an uncommon calmness, choosing to ignore all the distractions with stoic composure.

At the moment, all the speculations about a rift within the nation’s power vortex remain what they are, unverified rumours! At least, that’s what it is as long as Buhari and Osinbajo continue to keep a friendly mien.

Who did Adesina speak for?

An article by Buhari’s media aide, Femi Adesina, titled “ATIKU: They gave him a false sense of hope,” was a subject of serious public debate.

He, in the article, not only attacked and ridiculed Atiku Abubakar, the presidential candidate of the Peoples Democratic Party (PDP) in 2019 presidential election, but also Nigerians who supported him.

He had likened Atiku to the major character in William Shakespeare’s drama, Macbeth, who was deceived by witches into believing he was untouchable.

“Macbeth had been fooled, just as it happened to former Vice President, Atiku Abubakar, who had been hoodwinked into believing that he was President already, before the February 2019 election,” he had said.

According to Adesina, Nigerians who supported Atiku were those “who didn’t like Buhari, either because of ethnicity, language, religion, or the man’s aversion for corruption.”

Adesina got knocked, and justifiably so, because many Nigerians were at a loss as to the direction of his arguments, a likely return to autocracy where people are left with no choices to make regarding who governs them.

While it was not clear who Adesina was speaking for, he has been adjudged by many to be insensitive and presenting Buhari in a bad light as well as making him appear not to be magnanimous in victory.

Adesina may have been stewed in his own game by the response from Atiku’s aide, Segun Showunmi, who did a rejoinder also quoting a familiar author saying, “a fool doth think he is wise, but the wise man knows himself to be a fool. (William Shakespeare, As you like it).

The journalist who got beaten

An unlikely scene around the presidency was the treatment meted out to a journalist who was turned into a punching bag right in front of Osinbajo by the VP’s security aides.

Abayomi Adeshida, a photojournalist, was beaten up at the banquet hall of the presidential villa in Abuja where the Nigerians in Diaspora Commission (NIDCOM), chaired by Abike Dabiri-Erewa, organised a summit.

“They tore off my Presidential Villa accreditation tag on the shirt and dragged me on the floor while hitting me and kicking me… they would have done much worse if not for the intervention of the Vice-President’s aide-de-camp (ADC), who I noticed was making hand movements for them to leave me alone.

“I am feeling pains all over my body and particularly a severe pain on my right leg on which I don’t even know what they hit me with,” the journalist had narrated. Laolu Akande, Osinbajo’s media aide, has since apologised to the photojournalist on behalf of his boss.

An eventful week it was for Osinbajo and his principal. As we look forward to another seven days, Nigerians hope that the seeming rumblings in Aso Rock would assume a quieter nature and allow for focused action on the troubled issues of state.