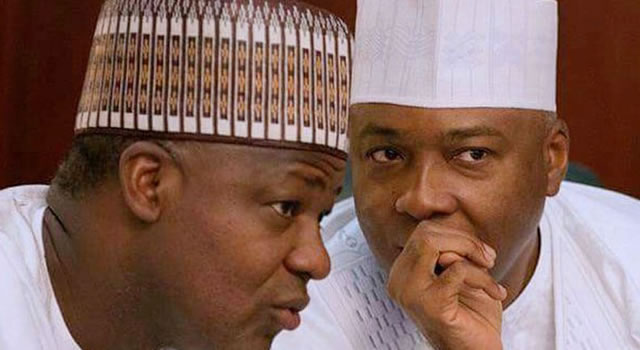 Socio-Economic Rights and Accountability Project (SERAP) has reacted to assertions that the National Assembly cut some proposed expenditures for capital projects in the 2018 budget.

The group accused the leadership and members of the National Assembly of “apparently engaging in crimes against humanity against millions of Nigerians by unilaterally cutting funding for critical projects such as health, water, education, housing and security, and replacing such projects with their own personal projects totalling 6,403 projects and amounting to N578 billion.”

The organization said, “the National Assembly cut funding for over 4,000 critical projects amounting to N347 billion.”

President Muhammadu Buhari had revealed on Wednesday while signing the budget into law that federal lawmakers added a sum of N14.5 billion to their own budget and cut budgetary provision for some critical projects.

Buhari said the lawmakers introduced some projects which were not part of the 2018 budget proposals, and increased its budget by N14.5 billion, from N125 billion to N139.5 billion without any discussion with the Executive.

SEARP advised President Buhari to “instruct the Attorney General of the Federation and Minister of Justice Mr Abubakar Malami to open discussion with the Office of the Prosecutor of the International Criminal Court (ICC) to establish whether substantial grounds and the requisite elements exist to warrant the intervention of the Prosecutor in this case. We note that under the Rome Statute, the Prosecutor has power to intervene in a situation under the jurisdiction of the Court if a state party, such as Nigeria, refers a situation to the court.”

In a statement on Thursday by SERAP deputy director Timothy Adewale the organization said, “Indicting individual lawmakers suspected to be most responsible for the reduction of funding for critical projects would provide a much-needed measure of accountability for leaders who have traditionally acted with impunity, assured that they will never be held to answer for their actions. Cutting funding for essential public services such as health, education and security constitutes a serious human rights violation and potentially rises to the level of crimes against humanity against the Nigerian people.”

According to the organization, “The deliberate and systematic acts of alleged budget padding and cutting of funding by the lawmakers coupled with the widespread negative consequences of such acts for millions of Nigerians across the country point to not only allegations of corruption but also crimes against humanity, that is, deliberately withholding access of Nigerians to essential and life-saving public services, which is triable at the International Criminal Court.”

The statement read in part: “Apart from pursuing a possible crime against humanity prosecution before the ICC, President Buhari should also move swiftly to enforce the judgment delivered last month by Justice Mohammed Idris in suit no: FHC/L/CS/1821/2017 ordering the President to ask anti-corruption agencies to forward to him reports of their investigations into allegations of padding and stealing of some N481 billion from the 2016 budget, and to ensure effort prosecution of suspects.

“It is the failure to decisively address allegations of padding of the 2016 budget that has allowed the practice to continue with almost absolute impunity. Combating impunity of lawmakers for allegations of budget padding is important for ending the practice and deterring future lawmakers from using their legislative functions as a weapon for promoting personal gains and denying Nigerians access to critical and life-saving public services.

“Crimes against humanity invoke criminal responsibility. Although the authorities bear the responsibility for violations of the rights to health, water, education and security, it is possible to hold individuals responsible for massive and grave violations of these human rights through the operation of the Rome Statute of the International Criminal Court to which Nigeria is a state party. Nigeria deposited its instrument of ratification on 27 September 2001.

“Those suspected of using legislative powers to allocate resources for personal gains and as an instrument to violate Nigerians’ human rights should be as guilty as those who commit traditional systematic and widespread crimes against the population, particularly the socially and economically vulnerable sectors of the population.

“Crimes against humanity in article 7 of the Rome Statute are committed as part of a widespread or systematic attack directed against any civilian population, with knowledge of the attack. Crimes against humanity are also committed as “other inhumane acts of similar character intentionally causing great suffering, as described in article 7(1) (k) of the Rome Statute.

“SERAP notes that the Office of the Prosecutor’s Policy Paper on Case Selection and Prioritization, 2016, states that the Office of the Prosecutor of the ICC will select cases for investigation and prosecution in light of the gravity of the crimes, the degree of responsibility of the alleged perpetrators and the potential charges. The impact of crimes may be assessed based inter-alia on the suffering endured by the victims and their increased vulnerability, the terror subsequently instilled, or the social and economic damage inflicted on the affected communities. The Office will give particular consideration to crimes such as the illegal exploitation of natural resources.”

“Crimes against humanity can be committed in peacetime. The requisite intention to inflict inhumane acts is satisfied when the alleged perpetrator had the intention to inflict serious physical or mental suffering or knew that the act or omission was likely to cause a serious attack upon the human dignity.

“Justice Idris has stated that ‘the allegation of budget padding is worrying, and if proved, criminal and therefore deserving of prosecution by the relevant agency of government. The Corrupt Practices and Other Related Offences Act 2000 makes it an offence for any person to corruptly enrich himself or in possession of unexplained or illicit wealth and allows criminal penalties and forfeiture during an investigation there are reasonable grounds to believe that corruption has been committed, that is, the stealing and padding of the 2016 budget.

“Justice Idris also stated that ‘there is no doubt that stealing, and budget padding are offences which fall within the class of corrupt practices envisaged in the ICPC Act. To this extent, President Buhari is under a legal duty to give effect to the provisions of the 1999 Constitution and the ICPC Act by instituting and undertaking criminal proceedings against indicted officers of the National Assembly who are alleged to have stolen and padded the 2016 budget.’”