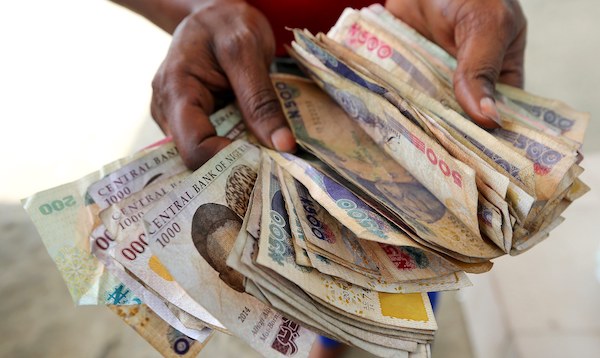 Currency in circulation continues to drop amid rising inflation in Nigeria, as the Central Bank of Nigeria (CBN) recorded a decline between January and February.

January had ended with N2.83 trillion, dwindling below the N2.9 trillion recorded in December last year. The drop continued in February after currency in circulation declined to N2.78 trillion.

This means about N120 billion drop was reported in the record kept by the apex bank in the first two months of this year. The amount in circulation, however, increased in March.

According to the central bank, currency in circulation rose to N2.81 trillion at the end of first quarter 2021, rising by N29 billion. This amount is still largely distant from the N2.9 trillion reported at the end of December 2020.

The reduction in currency in circulation this year occured as inflation rate rises to 18.17 percent, the highest in 49 months. Nigerians are now spending more on food items as food inflation rises above 22 percent.

This is caused by twin shocks resulting from the central Bank forex ban list and the border closure, both of which took effect in 2015 and 2019 respectively. This economic policies have increased the cost of living within the country.

For instance, In July 2020, the CBN included maize in its forex ban list. Prior to the ban, a unit of egg was sold at N30, ten months after, a smaller size of one egg is sold at N50 to N60 in the market.

Hollandia Yoghurt sold for N500 in March, is now sold for N700 within two weeks. The hike in prices is witnessed across almost all farm produce and basic food items. The price hike means more money going out of holders or circulation.

The central bank recognises increase in circulation of currency by every money withdrawn by a commercial bank at one of the apex branches, and a decrease by every note deposited in any apex branch by deposit money banks.