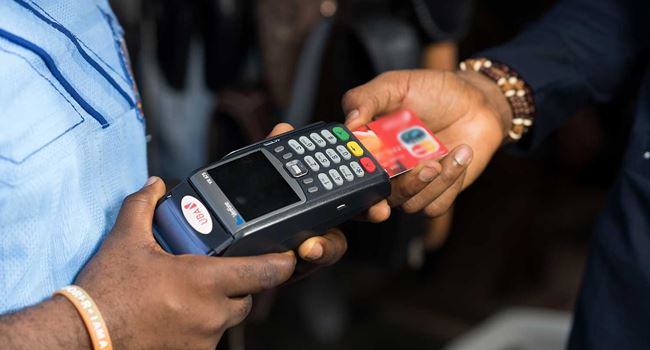 Electronic settlements conducted via the Nigeria Inter Bank Settlement Scheme Instant Payment (NIP) platform and Point of Sales (POS) terminals January through May 2020 climbed N3.63 trillion or 7.79 per cent to N50.3 trillion in contrast to N46.62 trillion posted in the same period of last year, industry data revealed on Thursday.

The two settlement channels altogether recorded 16 per cent improvement in payments within the period according to figures from the NIBSS.

NIP transaction turnover expanded by 17.3 per cent from N41.48 trillion to N48.66 trillion in as government curbs imposed on bank operations in the aftermath of the coronavirus outbreak compelled customers to increasingly embrace electronic payment platforms and lenders consolidated strategies to deepen financial inclusion.

As regards volume of transactions, NIP settlements swelled by 48 per cent to 615.33 million deals in the review period, up from 416.74 million in the same period the year before.

In the same vein, POS payment volume surged by 50 per cent from 152.60 million to 228.86 million, implying a massive advancement in Nigerian banks’ dream of scaling down customer traffic by encouraging transactions to be consulted beyond the banking hall.

Altogether, total transaction volume on the two electronic payment channels improved by 48.3 per cent from 569.34 million to 844.19 million, implying tremendous progress in banks’ quests to broaden digital engagement and deepen financial inclusion across their clientele.