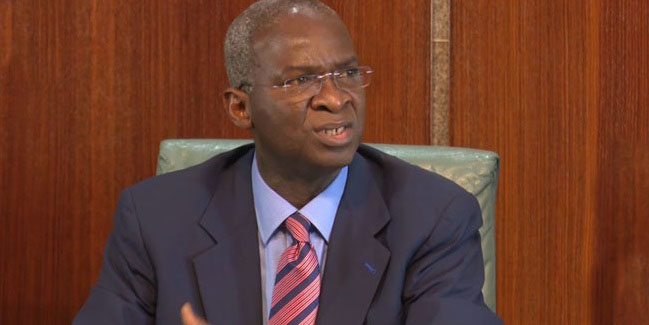 The Minister of Power, Works and Housing, Babatunde Fashola, has hit back heavily on the Association of Electricity Distributors (ANED), describing it as an interloper.

The minister had on Monday briefed newsmen on the status in the nation’s power sector, pointing out the lapses caused by the Electricity Distribution Companies (DISCOs).

On Tuesday, ANED, the umbrella body of DISCOs, in a 28-page document, faulted claims by the minister on their performance, status of the nation’s power generation and transmission capacities, among others.

However, Fashola, who issued a statement personally signed by him on Friday, said he did not recognize the Executive Director, Research and Advocacy of the association, Sunday Oduntan, maintaining that the law that guides his functions did not recognize him.

He said his directives were referring to legal entities like the Nigerian Electricity Regulatory Commission (NERC), the Bureau of Public Enterprises (BPE) and Nigeria Bulk Electricity Trading Company (NBET) and not to unlicensed organizations like ANED.

The minister noted that the power firms were sabotaging the nation’s economy by their actions.

“Throughout my Press Statement which contained the directives, I referred copiously to the provisions of the Electric Power Sector Reform Act (EPSRA) which is the law that regulates the power sector. I referred to DisCos in their capacities as licensees. Mr. Oduntan should tell members of the public if ANED is a licensee.

“His statement that no directives from me will save the power sector from collapse, is consistent with the views of someone who has no skin in the game.

“As for the allegation that figures of power generation and distribution released by me are not true, the taste of the pudding lies with those who eat it. Electricity consumers know what their experience was in 2015, 2016, 2017 and today.

“Electricity consumers (which include Fashola), want better service; NBET wants its money; about N800 billion, so she can pay GenCos; If DisCos can prove that FGN owes more than what we admit, they should deduct (N72 billion) from N800 billion and pay the remaining N728 billion which they owe NBET,” he said.

REVIEW… NIGERIA AIR: How not to make the same mistake

REVIEW… NNPC WALL OF SECRECY: Why war over revenue sharing may not end soon