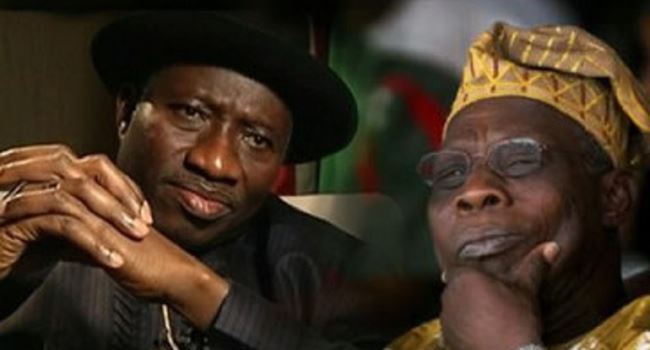 The Federal Government of Nigeria has been urged to immediately probe and ban former presidents Olusegun Obasanjo and Goodluck Jonathan from further attending state events.

The call was made on Thursday, by the Coalition for Nigeria Movement in a statement signed by its convener, Patriot Sabo Odeh, which also added that an immediate probe was a necessary penance for the alleged misdeeds of the former presidents against the country.

The group which lauded the renaming of Abuja Stadium as MKO Abiola Stadium among others by the administration of President Muhammadu Buhari also added that the erstwhile leaders must be probed to ensure they pay for any crimes.

The statement by the group reads thus; “These developments have elated Nigerians across class, ethnic, religious and political divides.”

“It is however alarming that there is a pocket of evil people that are saddened by the very fact that Nigeria’s democracy has survived their repeated assault on it, which has made their intentions to abort two decades of continued democracy to fail serially. So toxic is their bad wish for the country that they are unable to hide their disappointment and anger that the country is on the path of thriving in spite of their willful acts of sabotage against the nation.”

“To this end, the Coalition for Nigeria Movement hereby presents a 7-point demand to the Federal Government, which must be met to prove that the present administration is not colluding with Obasanjo and Jonathan to ink the country.

Our demands are: “That the Federal Government conduct a comprehensive audit of government funds by probing national finances from 1999 – 2015. This probe should be with a view to unravel the mysteries surrounding the loss of Nigeria’s resources, which has become imperative to unveil the true identities of those who stole Nigeria blind but are today parading as elder statesmen.

“That anyone indicted by the aforementioned investigation should be made to stand trial and handed the stiffest punishment applicable where they are convicted.

“That the Federal Government should henceforth not extend any invitation to state functions to any of Olusegun Obasanjo and Goodluck Jonathan for using their positions in the past to enrich themselves and families to the detriment of the common masses of our beloved country,” the statement read in part.