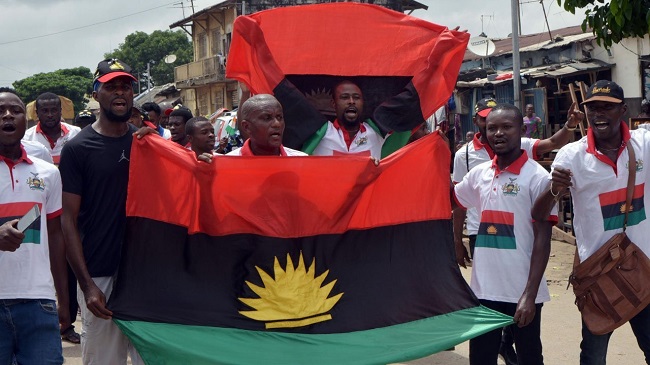 Proscribed Igbo separatist organisation, the Indigenous People of Biafra (IPOB) has blamed Igbo politicians for the constant insults heaped on the South-East by President Muhammadu Buhari and the Presidency.

The group was reacting to Buhari‘s recent orders to leaders of the region to speak up and fish out killers of eight Nigeriens who were reportedly beheaded in a community in Imo State last week.

In a statement on Tuesday by the group’s Media and Publicity Secretary, Emma Powerful, the Biafran group said if Igbo politicians in the corridors of power had not sabotaged its detained leader, Mazi Nnamdi Kanu, the Presidency would have taken the South-East region more seriously.

The statement also lampooned the Presidency for blaming the group on the killing, saying it amounted to intimidation of Ndigbo.

IPOB also wondered why President Buhari and the Presidency had not held Northern leaders responsible for bandits’ attacks in different parts of the country but were quick to blame the Igbo leaders for any act of violence in the South-East.

“How many times has the Presidency ordered Northern leaders to produce the bandits killing security agents mostly from the South but serving in the North?

“Treacherous Igbo politicians are to blame for all the insults the Presidency and President Buhari are giving to Ndigbo. If they had supported IPOB instead of sabotaging our leader, Mazi Nnamdi Kanu, by now the Presidency will be talking to them with respect,” he said.

Powerful further challenged the Presidency to show how many times it had ordered Northern leaders to fish out the perpetrators of the several senseless killings in the North, whose victims were mainly Southerners, Christians, and non-Muslims.

Related Topics:ipobsouth east
Up Next