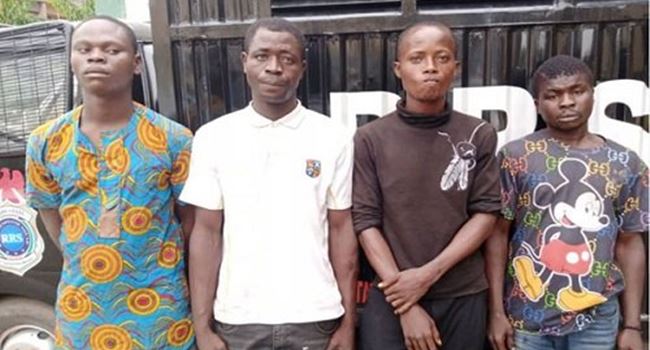 Operatives of the Lagos police command have foiled an attempt to rob some operatives of its Rapid Response Team (RRS).

The four suspects, Adewale Ismaila, 30, Chinadu Okafor, 26, Tote Victor, 19, and Abdulahi Olalere a.k.a ‘Orobo’, 20, were arrested on Thursday around Abiola Garden, Ojota, by an undercover police team they wanted to rob.

The state spokesperson Olumuyiwa Adejobi in a statement said that following complaints by motorists that they were being robbed in traffic, the police chief deployed its surveillance officers to the areas to curb and arrest the perpetrators.

Adejobi said: “The surveillance team was on a decoy at about 6:30am beside ‘Abiola Garden’ when the suspected criminals came out with dangerous weapons in an attempt to rob the policemen, demanding for their wallets and other valuables before they were all apprehended.

“One of the suspected traffic robbers, Abdulahi Olalere a.k.a ‘Orobo’, confessed to belonging to a robbery gang which specialises in attacking and robbing innocent motorists of their belongings in the early hours along Ikorodu Road, Ketu, China Town and Tipper garage.

“Preliminary investigation revealed that Abdulahi Olalere a.k.a ‘Orobo’ was recently released from a Correctional Center, having served six months jail term for same robbery incidents in 2020.

“The Commissioner of Police, while directing that the suspects be transferred to the State Criminal Investigation Department, Panti, Yaba for investigation, however promised to channel both material and human resources of the command to tackling traffic challenges including traffic robbery and other forms of criminality in Lagos State.”

Mr Adejobi also said the police chief had a meeting with traffic officers in the state, Area Commanders, DPOs and the Officer in charge of Motor and Transport Division of the command to improve traffic management.

He said “CP Hakeem Odumosu called their attention to the strategic places and roads where rehabilitation and construction works were ongoing, which will naturally experience heavy traffic, and directed that more personnel be deployed to such places for free flow of traffic.”