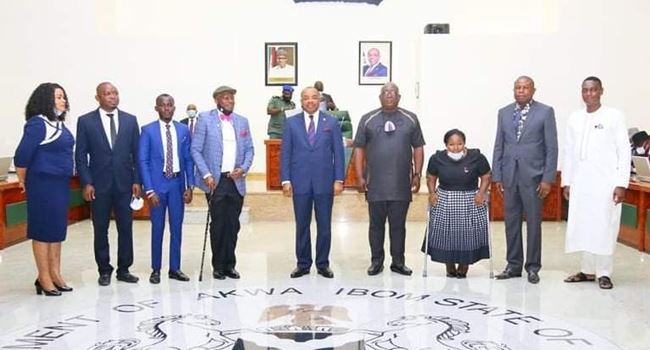 Uweh, who revealed the chronology of events before the Justice Ifiok Ukana-led Judiciary Panel of Investigation, stated how police officers broke into her house, shot her in the leg, and fled.

The mother of four sought the sum of N20 million as compensation for the troubles she had passed through since the incident in 2010 and to be able to get proper medical treatment.

In a memo, JPPB/MEMO/061 presented to the panel by the counsel to the petitioner, Ewa Okpo Edmund, Mrs Uweh narrated, “As I was lying down in my room when I came back from the market, some armed policemen broke in, I was shocked because I never had issues with anybody. Immediately, I heard another policeman within the premises shouting, “including that room, including that room.”

In the midst of that confusion, according to the victim, she tried to stand up from her bed to inquire what was going on, unfortunately, the policeman that was inside her room shot her in the leg and zoomed off.

Uweh further disclosed that her parents reported the incident to the then village head, late Chief Deyang who confirmed that he actually invited the police officers to the community to raid and arrest the youths terrorizing the village.

She bemoaned the lack of investigations by the Police while revealing how she had spent millions of Naira in medical expenses.

Also, the petitioner’s counsel, Ewa Edmund in his prayers, requested the panel to ensure a state-sponsored treatment for the victim, scholarship for her children willing to pursue their academics or any chosen vocation and cash compensation of N20 million for the loss the victim and her family had suffered.

However, the Chairman of the panel, Justice Ukana, in response adjourned the case for consideration in camera.

2.3m Nigerians register for COVID-19 vaccination in less than 24 hours