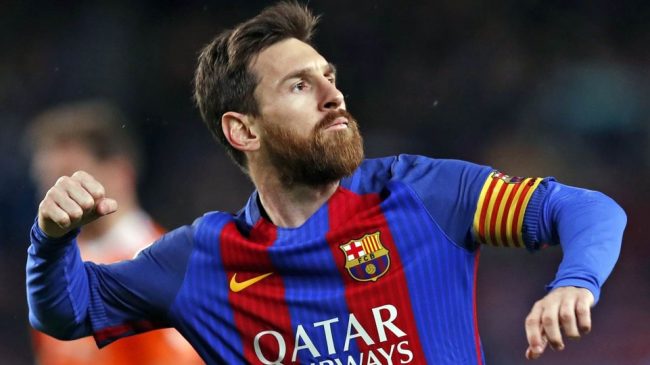 Argentine superstar, Lionel Messi was on target in Barcelona’s victory over Athletic Bilbao at the Camp Nou on Sunday, as the Catalans maintained their unbeaten La Liga record this season.

Paco Alcacer scored after only eight minutes to put the hosts ahead when he steered in Jordi Alba’s pull-back, before Messi made it 2-0 with a low strike on the half hour mark.

Barca dominated the encounter and could have had more goals as Philippe Coutinho hit the crossbar twice, and Paulinho too once.

The La Liga leaders are 11 points clear at the top of the table, with second-placed Atletico Madrid having lost to Villareal 2-1 later on Sunday.

Antoine Griezmann had put the visitors ahead from the spot before Turkish international, Enes Unal scored twice for the home side to defeat Atletico.

Barca may become the first team ever to go an entire 38-game La Liga campaign without defeat, as they have already won 23 and drawn six of 29 matches played so far.

However, the record for an unbeaten run from the start of a La Liga season is 32 games, set by Real Sociedad in 1979-80, and Barca are four games away from setting a new record.