Now that Obasanjo, El-Rufai are hugging publicly, see what we found out about their past romance | Ripples Nigeria 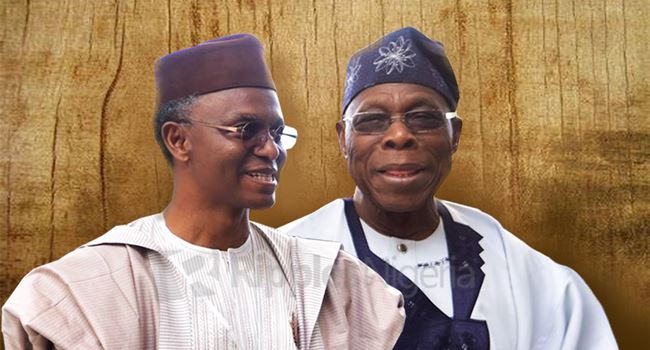 Former President Olusegun Obasanjo, on December 11, 2019, paid a surprise visit to the governor of Kaduna State, Mallam Nasir El-Rufai, in Kaduna. The media space was littered with the news of the visit as Obasanjo praised El-Rufai to high heavens while the governor extended the same hand of fellowship to him.

“We need a character like this, a man that you know where you stand with him. Any job given to him will be well done,” Obasanjo said smiling while El-Rufai watched with contentment.

El-Rufai had served as the Director General of Bureau of Public Enterprise, (BPE), and later as the Minister of the Federal Capital Territory, (FCT), during Obasanjo’s administration. And, he (Obasanjo) relished the times when he asserted that El-Rufai was “one of the best persons to work with, he is a near-genius.” In response, the governor described Obasanjo as a mentor from whom he learnt many public service skills when he served in his administration.

Obasanjo’s visit and praises, in different quarters, were interpreted as a subtle indication that he might be in support of the alleged interest of the governor in running for the presidency in 2023. In August 2019, the outspoken governor had made a call for the scrapping of zoning for political offices in favour of competence – a move which shed light on his perceived presidential ambition. This is based on the permutation or assumption that political leaders in the South would demand a power shift to the region in 2023, having conceded two terms of governance to the North under the Muhammadu Buhari’s administration.

Known for propping up the country’s future leaders, Obasanjo’s visit had, therefore, been viewed by critics as an early move to endorse whatever ambitions El-Rufai may be nursing. Fresh in the memory of Nigerians is the active role he played in the enthronement Ogbeni late Umar Yar’Adua and Goodluck Jonathan as presidents.

Between men, however, and in spite of the public hugs, lies some deep rooted resentments of each other. Indeed, mudsling had defined part of their relationship in  time past History never forgets!

John Chukwu of Ripples Nigeria reviews the Obasanjo/El-Rufai romance in the context of what had been, and what may be playing out ahead of 2023.

‘El-Rufai loves lying and has no integrity’

Obasanjo, in his book, “My Watch,” launched on February 11, 2015, said a lot of uncharitable things about El-Rufai. In the book, the former President noted that the Kaduna State governor loves lying, damaging people’s image and cannot be trusted.

“Nasir El-Rufai’s penchant for reputation savaging is almost pathological. Why does he do that? He is brilliant and smart. I grant him that too. Very early in my interaction with him, I appreciated his talent and brilliance. At the same time, I recognized his weakness.

“The worst is his inability to be loyal to anybody or any issue consistently for long, but only to Nasir El-Rufai. He barefacedly lied which he did to me severally about his colleagues and so-called friends. I have heard about how he ruthlessly savaged the reputation of his uncle, a man who like in the African setting, his foster father. I shuddered when I heard of what he did to his half-brother in the air force who was senior to him.

“So when Osita Chidoka approached me among others, prodding Nasir as my possible successor, believing that whoever I supported would make it, which was a false belief, did not hesitate to point to Nasir’s naivety and immaturity, talk less of his ability to give honour to whom it is due.

“My vivid recollection of El-Rufai is his penchant for lying, for unfair embellishment of stories and his inability to sustain loyalty for long. Two years after I left office, Osita came to me confirm how right I was on my assessment and judgement of El-Rufai. Nasir was described as a malicious liar. He is more than that. He is a pathological purveyor of half-truths and half-truths with little and no regard for integrity.”

‘Obasanjo not a patriot but selfish politician’

Known for his acerbic attacks, El-Rufai, in his own book “The Accidental Public Servant,” launched on February 7, 2013, spared no words for Obasanjo. Among others, he alleged that Obasanjo’s choice of the late Umaru Musa Yar’Adua and Dr. Goodluck Jonathan as President and Vice-President in 2007 was not driven by patriotism but to make Nigerians pay for his failed third term bid.

“President Obasanjo chose Umaru Yar’Adua whose ill-health, among other challenges, was known already constituted a serious impediment to the possibility of any inspired and energetic leadership. The view of many well-informed Nigerians is that Yar’Adua and his deputy, Goodluck Jonathan, emerged for no other discernable reasons than being ‘weak’ governors sympathetic to the ‘Third Term’ project and therefore handpicked as payback.”

El-Rufai also noted in his book that Obasanjo, on bended knees, begged his then Vice-President, Atiku Abubakar, for political survival in 2003 when he feared he could lose the Peoples Democratic Party’s (PDP) re-nomination bid, if he did not make peace with Atiku.

“The stakes were high enough for Obasanjo to swallow his considerable pride and go to Atiku on bended knees. Obasanjo had no problem going down on his knees to beg for what he thought was impossible to obtain any other way.

The political bricksmanship got so bad that Obasanjo had to visit Atiku’s residence unannounced to plead for Atiku’s support. Upon arriving at his deputy’s residence, he reportedly knelt before Atiku and begged the Vice-President to remain onside, thus, guaranteeing the support of the 17 PDP governors. In return, Obasanjo had agreed to retain Atiku as his running mate,” he stated.

Are Obasanjo and El-Rufai for real this time?

It is generally admitted that politics is an interest-driven game. This is why a conversation around the renewed romance between Obasanjo and El-Rufai would assume the front burner for some time to come.
On his part, Obasanjo is viewed as the old fox, an opportunist who lies in wait for the unfortunate prey. Many critics believe that the recent optics are not without an agenda, and this has raised several posers.

Prior to the 2019 presidential election, was it not Obasanjo, on August 3, 2019, who told Nigerians that he would not support Atiku’s presidential bid. “How can I be on the same side with Atiku? To do what? If I support Atiku for anything God will not forgive me. If I do not know, yes. But once I know, Atiku can never enjoy my support,” he said.

He was to swallow his vomit a little later. Indeed, on October 11, 2018, when Atiku and leaders of the PDP visited him at his Abeokuta home, Obasanjo was quoted as saying that Atiku had now ‘re-discovered and re-positioned himself’ and is now good enough to enjoy his support in the election. “In the presence of these distinguished leaders of goodwill today, let me say it openly that we have reviewed what went wrong on the side of Atiku. And in all honesty, my former Vice-President has re-discovered and re-positioned himself,” he said.

As 2023 approaches, one thing is certain. The political space will witness many more of such Obasanjo/El-Rufai rapprochement that will define the schemings for who or what region takes the driving seat in the race for the presidency. The other undeniable fact is that quarreling politicians will, as usual, cast away their grievances against one another and form new alliances for their collective self or group interest.

Will Obasanjo back the speculated ambition of El-Rufai to run for the presidency in 2023 against the much held assumption that power would shift to the south? Or, is the Kaduna optics a dress rehearsal to position the Kaduna governor as North’s best bet for the position of running mate, that is, if the zone concedes to power shift ahead 2023? Indeed, does this planned marriage suggest an impending strategic alliance to checkmate the alleged presidential dreams of Bola Ahmed Tinubu who is a sworn rival to both men?

These posers are the reason Obasanjo’s description of El-Rufai as ‘a near genius’ must be perceived for what it is, an agenda-setting initiative, not just to market the Kaduna governor but provide meat for the populace to chew ahead of 2023.

El-Rufai himself is no stranger to the corridors of power where no prisoners are taken in the quest for power. He is undeniably smart and unafraid to rock the table. He, no doubt, understands that only an old war horse like Obasanjo can ride behind him to ruffle feathers and fight dirty, if need be.

It would be interesting to watch how El-Rufai confronts or uproots perceived or real enemies having stepped on so many toes, including some already referred to as cabal under the present Buhari administration.